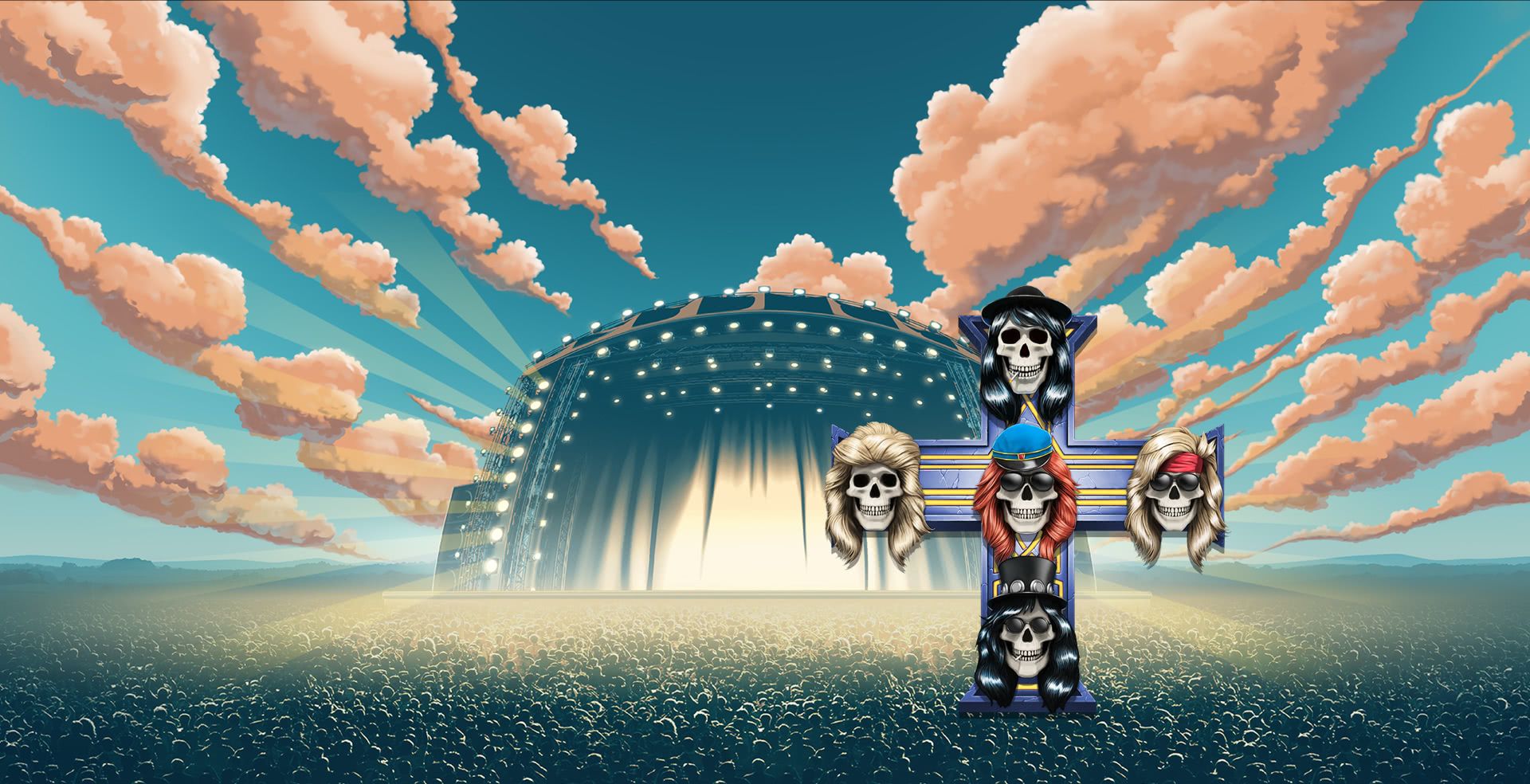 NetEnt gaming has really taken the bull by the horns in this slot. There are features galore, and interactive treats along the way. The reels are set in front of a live stage, with fans cheering along below as you go. During play there are various cut scenes, bagging a Big Win will award you a lovely montage of video footage of Guns n Roses on tour. The crowd offer up different levels of excitement depending on the size of your prize, earn a biggie and you’ll be showered with magnetic confetti, the stage lights searching the sky, and the crowd almost beside themselves with excitement.

You won’t be surprised to hear the background track is a compilation of some of Guns n Roses greatest hits, these play the singles in their entirety as you spin the reels, not only that, you can select the tracks you’d like to hear from the setlist - bottom left of the screen. The letters and numbers are adorned with roses, of course. The plectrums have a tattoo like quality about them, and the 3 main band members have been illustrated with an uncanny likeness. So, don’t delay, purchase your tickets and take your place in the mosh pit for an exciting live concert experience. 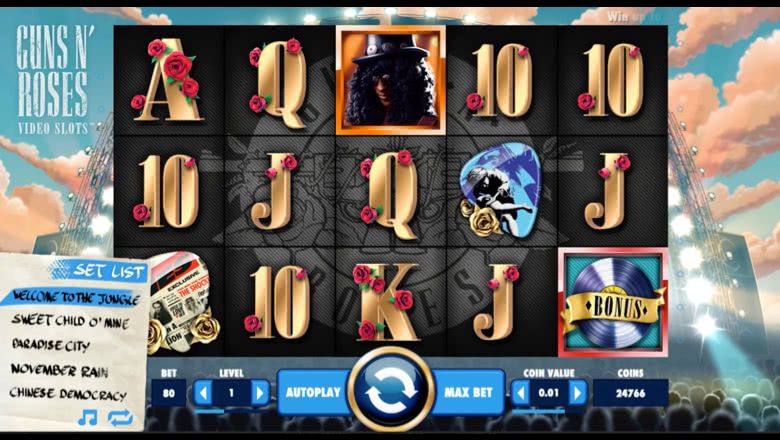 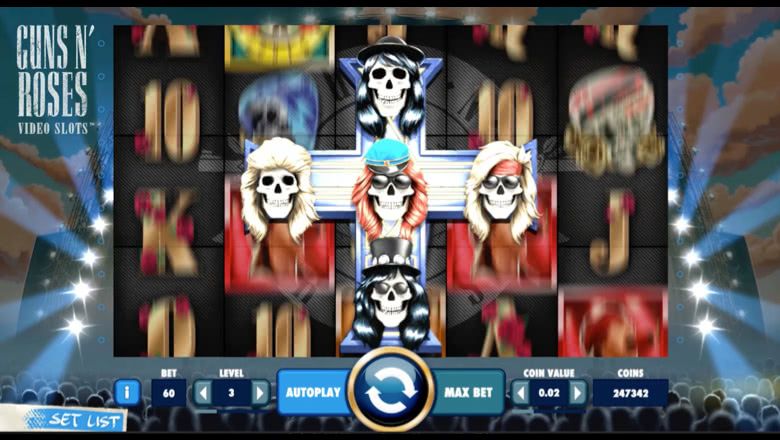 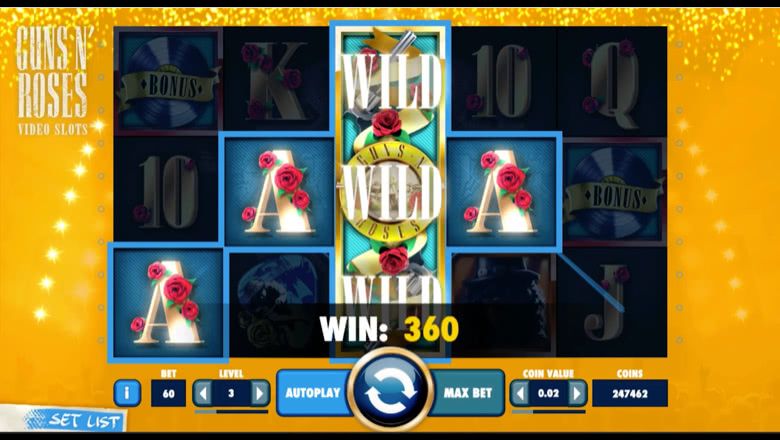 Where to begin? Let’s try at the start, shall we? This video slot is jam-packed with features and action. Once those reels start spinning it’s game on. Many of the features are random which keeps the player in suspense, waiting for them to pop up at any time. There is a random overlay Wild, in the form of a cross. We have the random Legend Spins bonus awarding Free Spins with special Stacked Wilds; a Solo Multiplier awarding anything from 4x to 10x your bet; the Multi Award Bonus Wheel with 3 additional features awarded randomly. This is one gig you do not want to miss. The organisers have pulled out all the stops to give you the experience of a lifetime.

The three main band members are the highest paying symbols on line wins, Axl Rose being the most valuable player, as you would expect. They even have some funked up plectrums to throw out into the crowd as a special little bonus to increase your prize pot. Although it may look like there’s a lot going on and you think you’ll get in a muddle, don’t worry the game leads you through every bonus round with simple instructions to get you going. Take your seat and let the games begin.

There are so many bonus features it’s hard to keep track, but it makes for a very exciting game. The Appetite for Destruction feature is triggered at random and involves an overlay Wild in the shape of a cross, it can be a full cross or a partial cross. It substitutes for all other symbols except bonus symbols.

The Solo Multiplier is yet another random feature, it can award anything from 4x to 10x your bet. There has to be 3 or more matching symbols on a payline for it to be triggered.

The Multi Award Bonus Wheel is triggered when the scatter symbols appear on reels 1, 3, and 5. One of the 3 features, Encore Free Spins, Coin Wins, and the Crowd-Pleaser Bonus Game, will be awarded randomly.

Coin Wins Feature - A random number of coins based on your initial bet amount will be awarded, which could be anything between 200 and 600 coins.

Crowd-Pleaser Bonus Game - This is a Prize Pick with 3 levels. A number of Picks will be awarded and up to 600 coins can be won with each pick. 3 PIcks will be awarded on level 1, where there are 8 items to choose from. If you succeed in collecting 60 coins when your picks have finished, you will be moved up to level 2. At the start of level 2, you will be awarded another 3 picks. On this level you will not move up to level 3 unless you have collected a total of 300 coins from level 1 and level 2 combined. The final level is level 3, there you will play the last round having been awarded a further 3 picks.