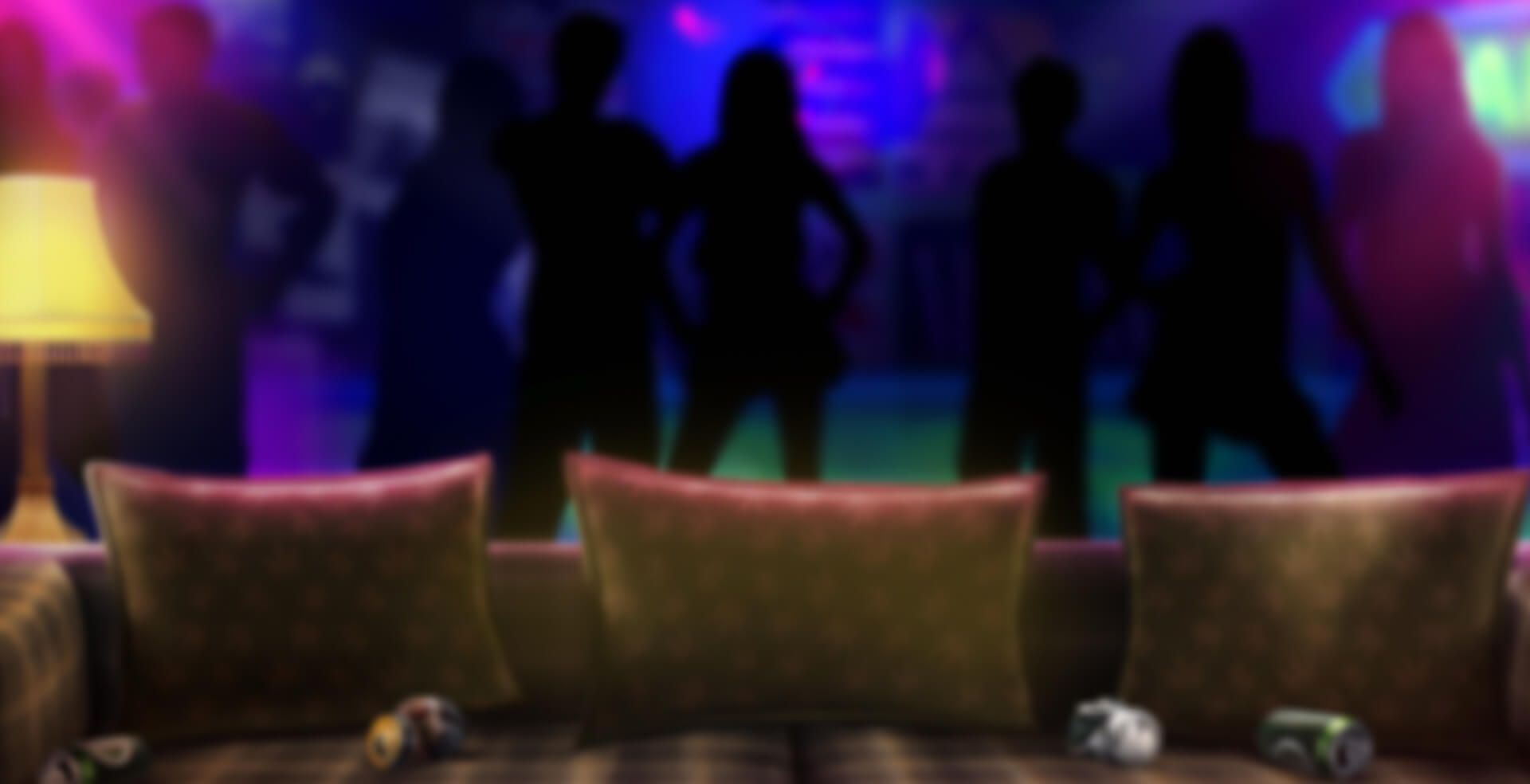 The lovably horrible Ted makes his slot debut with a game full of beers, bongs, women and…ducks? Blueprint Gaming have crammed this game full of jokes, references, characters and a lot of foul language - as Ted would say, there’s a fur-king lot going on here.

The over-the-top nature of the game’s humour carries over into the wacky theme and sheer number of bonus features. There are 6 game modifiers that trigger randomly as you play and a bonus ladder that offers 5 different bonus rounds too.

Ready to be an honorary member of the Thunder Buddies? Play now at MrQ - the ultimate Ted slots site.

Play Blueprint's version of the hit film on all of your favourite devices as Ted is fully optimised for mobile play and can be played in portrait mode straight from your browser to get every bit of the action. Spend the night with everyone's favourite naughty bear on any of your iOS or Android devices. 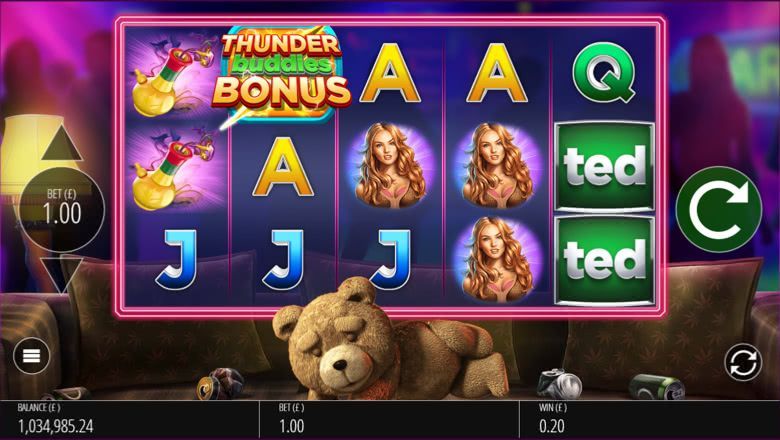 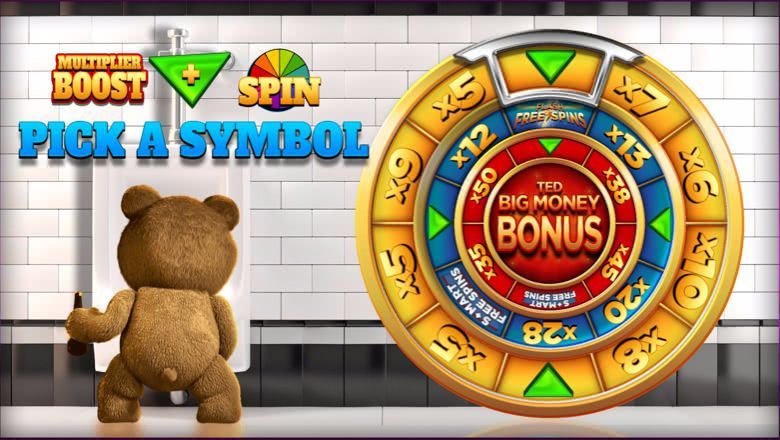 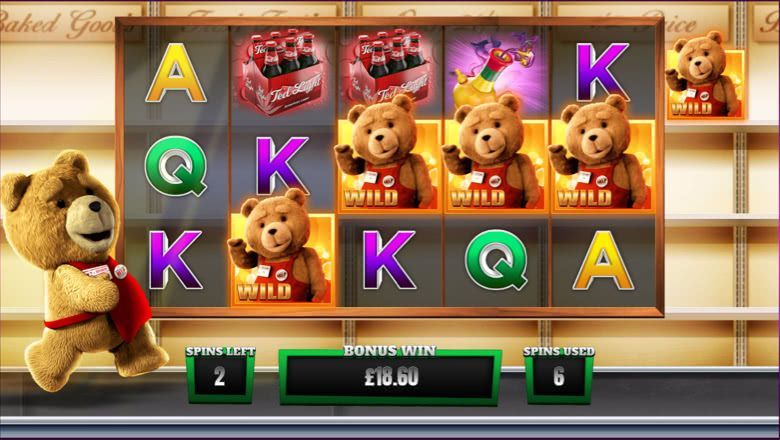 How to play Ted

How to Win Ted Slot

Ted contains up to 20 potential paylines and matching at least 3 symbols along these paylines will trigger a win with winnings being given based on the landed symbol and the current bet level. The highest paying symbol is the green Ted symbol which will award a maximum of £25 for landing 5 (based on a £1 bet).

Ted also contains a vast number of bonus features that can be activated either by landing 3 or more Scatters or activated randomly on any spin at any bet level. Unlock bonus game that award instant cash prizes, award free spins, or give you entirely new game boards to play with and collect special multipliers that are applied to the activating bet level. You always have a chance to work your way towards the highest level bonus game of the Ted Big Money Bonus which awards instant win multipliers that can be applied multiple times to create big rewards.

Random Modifiers- There are 6 different game modifiers that Ted can randomly trigger as you play, which you’ll know is happening when Ted wakes up from his nap at the bottom of the screen. The potential modifiers are:

If all that wasn’t enough, there’s also a Thunder Buddies bonus symbol too. When 3 or more of these appear on the board, the bonus feature is triggered where you’ll spin to see which of the 5 bonus rounds you’ve won. The potential bonuses are:

Wheel of Fortune- Pick a Ted to add a bonus to the Wheel of Fortune including multipliers, additional arrows, and additional spins. Spin the wheel to win an instant cash prize or immediately unlock the Ted Big Money Bonus feature.

Bar Crawl Bonus- The Player is transported to a new game board in the style of a board game. Select bottles to move a number of spaces around the board and collect multipliers along the way. If you land on a special space you have the chance of upgrading multipliers, win instant cash prizes, or collect a Ted Big Money Bonus token. Collecting 5 Big Money Bonus tokens will activate the feature. Once the feature ends, a multiplier is spun and applied to your total winnings. You then have the choice of 1 of 2 pick options that will either reveal a respin or a collect. A respin will continue your current progress and the game will continue until the end is reached. Collect will award the final value and return you to the base game.

S Mart Free Spins- 5 free spins are awarded and Ted will start running along a conveyer belt. While running, Wild symbols will appear behind the reels and, on every spin, will be applied to the reels to create wins. The pattern and number of Ted Wilds changes on every spin.

Ted Free Spins- A number of free spins are awarded and bonus symbols are highlighted above the reels containing prizes. Any Bonus symbol landed during the mode will allow for a selection of the bonus symbols above the reels. An arrow will move left to right and award the landed prize when stopped. Prizes include additional free spins, cash prizes, and extra Wilds that are applied to the next spin. After each sweep, the rightmost symbol is converted into an advance arrow that will upgrade the symbols to a new selection. Reach the end of the trail to be awarded the Ted Big Money Bonus feature.

Ted Big Money Bonus- Ted will appear in the middle of the screen with a wheel of multipliers. Spin the wheel to reveal a multiplier that will be applied to the activating bet level. Once completed, you have the option to pick 1 of 2 symbols that will reveal either respin or collect. Activating respin will keep your current winnings and add an additional multiplier to the total. Collect will award the final prize and return you to the base game.

What is the Ted Slot RTP?

The Ted Slot return to player is 95.80% - this is the expected payback over a long session of play. For every £10 staked, you're expected to be paid back £9.58 over a session.

Does Ted contain a jackpot?

While Ted does not have a jackpot, this cuddly bear has a grand prize of 1,250x your total bet up for grabs. At the max bet level, the biggest possible win is £62,500.

How do I trigger Ted free spins?

Free spins can be awarded from the Thunder Buddies Bonus - hit 3 scatters to climb the feature ladder and win of the free spins bonuses.

What is the volatility for Ted Slot?

The volatility for Ted is Medium meaning that there is a decent chance of winning on any given spin and the potential reward is also fairly decent.

Can I play Ted Slots on mobile?

You can play Ted on all of your favourite mobile devices now on MrQ. Sign up today and explore over 900 real money mobile slots and casino games that are fully optimised for play on iOS and Android devices.

Party with the gods in Midas Golden Touch, the lavish slot game filled with multiplier wilds, respin feature and a chance to add up to 32x to any payline win.

Collect bundles of dazzling gems as you adventure through 3 distinct worlds bursting with treasures.

The lights are on bright and it’s showtime! It only takes a spark to trigger a chain reaction of cash prizes.