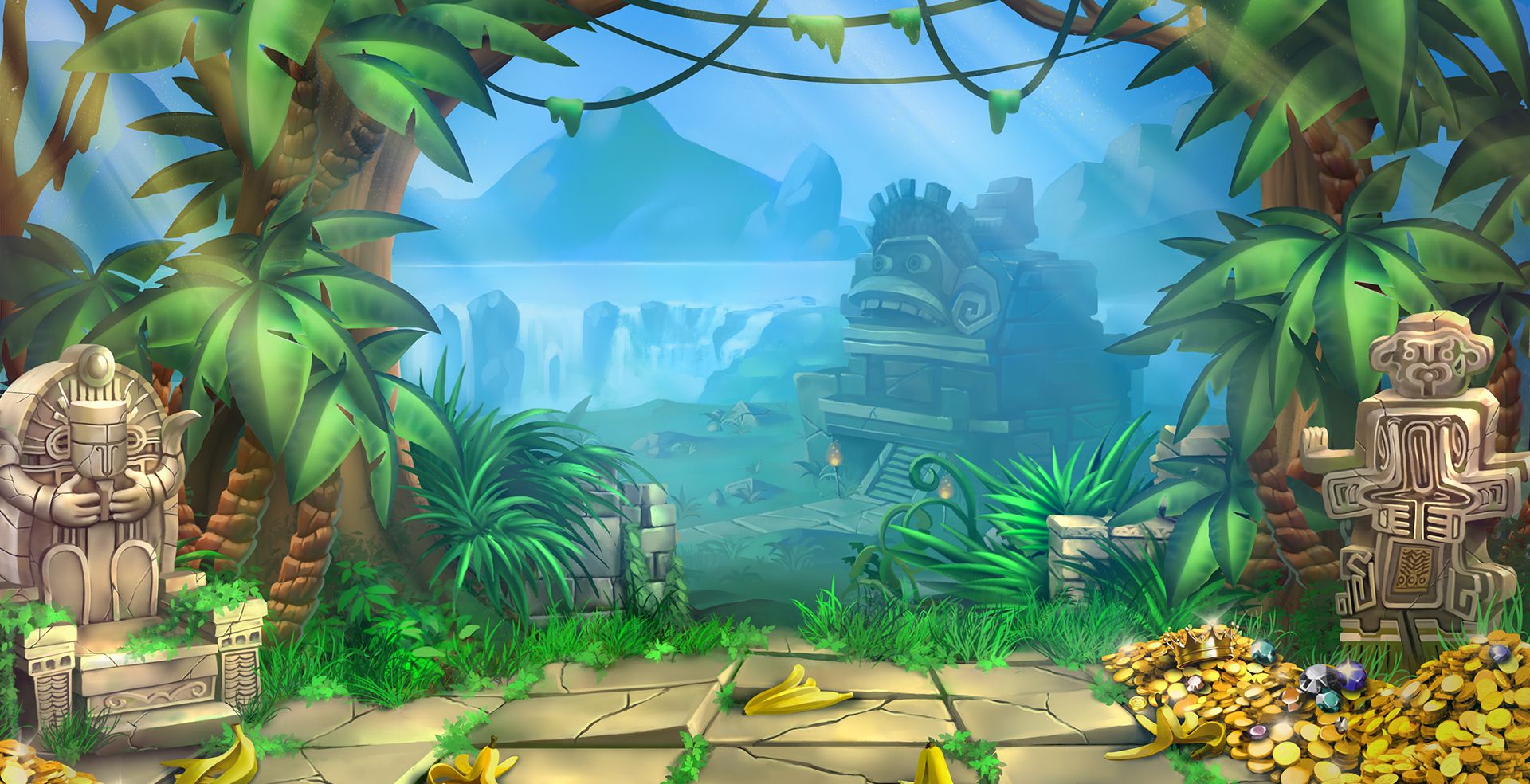 The eighth wonder of the world, immortalised in slot form! Far from the top of the Empire State building, King Kong Cash slot shows our giant ape friend kicking back and relaxing, jungle style. BluePrint Gaming has bought a colourful cast of animals to life with bright art and King Kong’s grunts, backed by a tribal soundtrack!

The game’s bonus features include 5 random modifiers that could trigger at any time with a wide range of effects. and a bonus ladder, with 5 different bonus features available. These range from free spins, random stake multipliers and big cash bonuses up to 1000x your stake.

King Kong Cash has 20 pay lines, so there’s plenty of ways to win even without all the added bonus features. Symbols include the various animals as well as the traditional royal letters. However, none are worth as much as the wild or King Kong Cash jackpot symbols!

Go ape and unlock King Kong's mighty bonus features on all of your favourite iOS and Android mobile devices. Play in portrait or landscape mode with lightning fast loading times that gets you in the action in seconds. 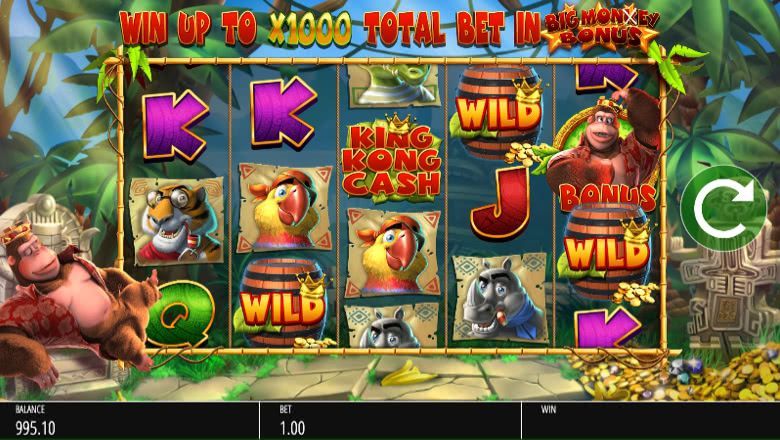 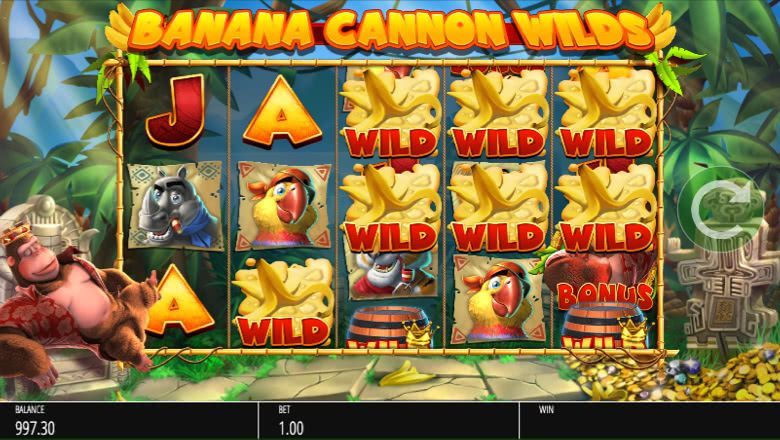 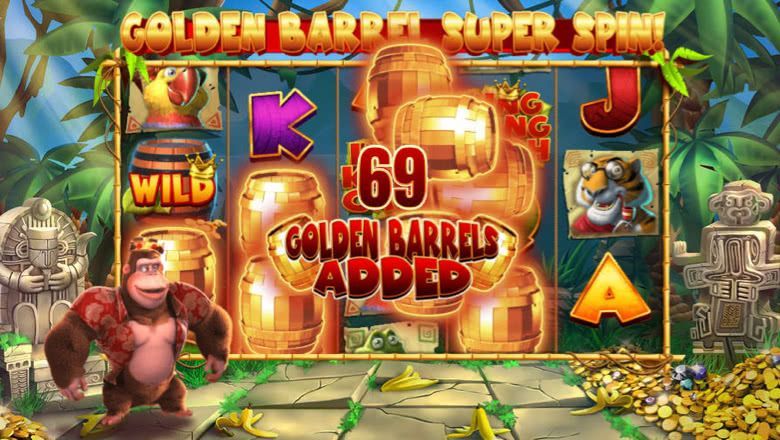 How to play King Kong Cash

Modifiers- There are 4 different game modifiers that can randomly trigger as you play, which you’ll know is happening when King Kong bashes the play board with his hammer. These random modifiers can alter your game by shooting wilds onto the board at random, filling the reels with golden barrels that transform into a random symbol and more. The potential modifiers are:

If all that wasn’t enough, there’s also a King Kong bonus symbol too! When 3 or more of these appear on the board, the bonus feature is triggered and you’ll be rewarded with one of the 4 bonus rounds. If you didn’t get the bonus feature you wanted you can gamble it for a chance to move up the ladder and aim for the Big Money Bonus. The potential bonus games are:

Barrel Blast- A number of barrels are selectable with each containing an item. Each item corresponds to a different bet multiplier. Match 3 of the same symbol to instantly win the multiplier. Finding upgrade symbols upgrades all of the available multipliers. Matching 3 Golden Monkey symbols will award the Big Monkey bonus.

King Kong Trail- You are transported to a trail filled with multipliers. Select the barrels that can move Kong up to 5 spaces, ends the feature, or awards the player instantly with the Big Cash Monkey Bonus. If the Big Cash Monkey Bonus is activated, then the player is transported to a wheel of multipliers that are applied to the total bet. You will then get to select 1 of 2 bananas that either reveal a free respin or end the feature and collect all wins. Any additional multipliers gathered during the respin are added to the total win.

Empire Free Spins- The player will start at the bottom of the building on the lowest set of reels. The reels will spin as normal with all Wilds sticking to the reels and roaming during every spin. For every 3 Golden Monkeys found, the next set of reels is unlocked and all Wilds remain in play. If 2 Wilds land on the same space, they will expand to cover the entire reel. The feature ends when all free spins have been used.

Golden Kong Free Spins- The feature is played on a new game board with an increased 40 potential paylines. During the feature, all Wilds are added to a accumulative bank. Once all spins have been used, special Wild spins are awarded and all collected Wilds become Sticky Wilds that remain for the duration of the feature. After every Wild Spin, you can select from 1 of 2 barrels that will either reveal a Golden Donkey or a bomb. If a bomb is revealed then the feature ends. If a Golden Donkey is revealed, then the reels are re-spun with all Wilds shifting positions.

King Kong Cashpots- King Kong is back with pots of glorious cash to give out. Unlock the bonus free spins wheel and spin for the chance to unlock up to 30 free spins with an additional 5x multiplier applied to every win during the free spins mode.

King Kong Cash Prize Lines- Create Power Lines along the reels in this Slingo-style slot variation. Work your way up the Power Lines ladder and unlock up to 7 exciting bonus features worth going bananas over.

What is the King Kong Cash RTP?

How much can I win on the King Kong Cash slot machine?

King Kong Cash Jackpot King gives you a chance to win a progressive jackpot prize. You'll find this game at MrQ with hundreds of other juicy jackpot games.

King Kong Cash does not contain a jackpot but has a gorilla sized max win of 12,500x your total bet.

What is the King Kong Cash slot volatility?

The volatility for King Kong Cash is Low-Medium meaning that the chances of achieving a win is high but the payouts for each win is lower.

Can I play King Kong Cash on mobile?

Yes, King Kong Cash plus dozens of other popular Blueprint games are available on your mobile or tablet device at MrQ. Using your iOS or Android device, login to the lobby and go bananas on this classic game.

Wrap up warm and wade through the snowy tundra in search of the fabled Arctic Enchantress. Will you brave the ice to win something nice?

A rainbow lights up the sky and we all know that means only one thing. There’s a Lucky Leprechaun afoot with a pot full to bursting with shiny gold.

It’s gold galore in this adventure that promises to be 24-karat. Spin on the blitz and discover golden treasures.