It’s time to start your engines because 12 fierce entertainers from across the nation will compete weekly on the runway for the ultimate title of the UK’s Next Drag Superstar.

MrQ has analysed the next batch of queens’ social accounts (including Instagram, TikTok and Cameo) to determine who is already sashaying to the bank.

Renowned on the drag scene for her outlandish looks, Charity Kase tops the list with the potential to earn up to £359,248 through Instagram, TikTok and Cameo, and this is before she’s even started on Ru Paul’s show. Despite having the second-highest number of followers on Instagram, her engagement rate means she rakes in £41,689 a year on average through the platform alone.

Charity is the only queen fully utilising TikTok as a means to engage with her fans, earning an estimated £1,000 on the platform so far.

Set to make herstory as the first queen from Spain to compete on the show, Choriza May is the second-highest earner with potential earnings of up to £90,728. Working in illustration and graphic design outside of drag, Choriza will be one to watch in the werk room.

The third-highest earner, Veronica Green, is making a return after leaving the last season due to medical reasons. Veronica has already profited from her first stint on the runway, earning a maximum of approximately £84,330. Her newfound fame means she can charge the highest rate on Cameo at £75 per video.

Now, this is just a fraction of what the queens could potentially earn after the show... 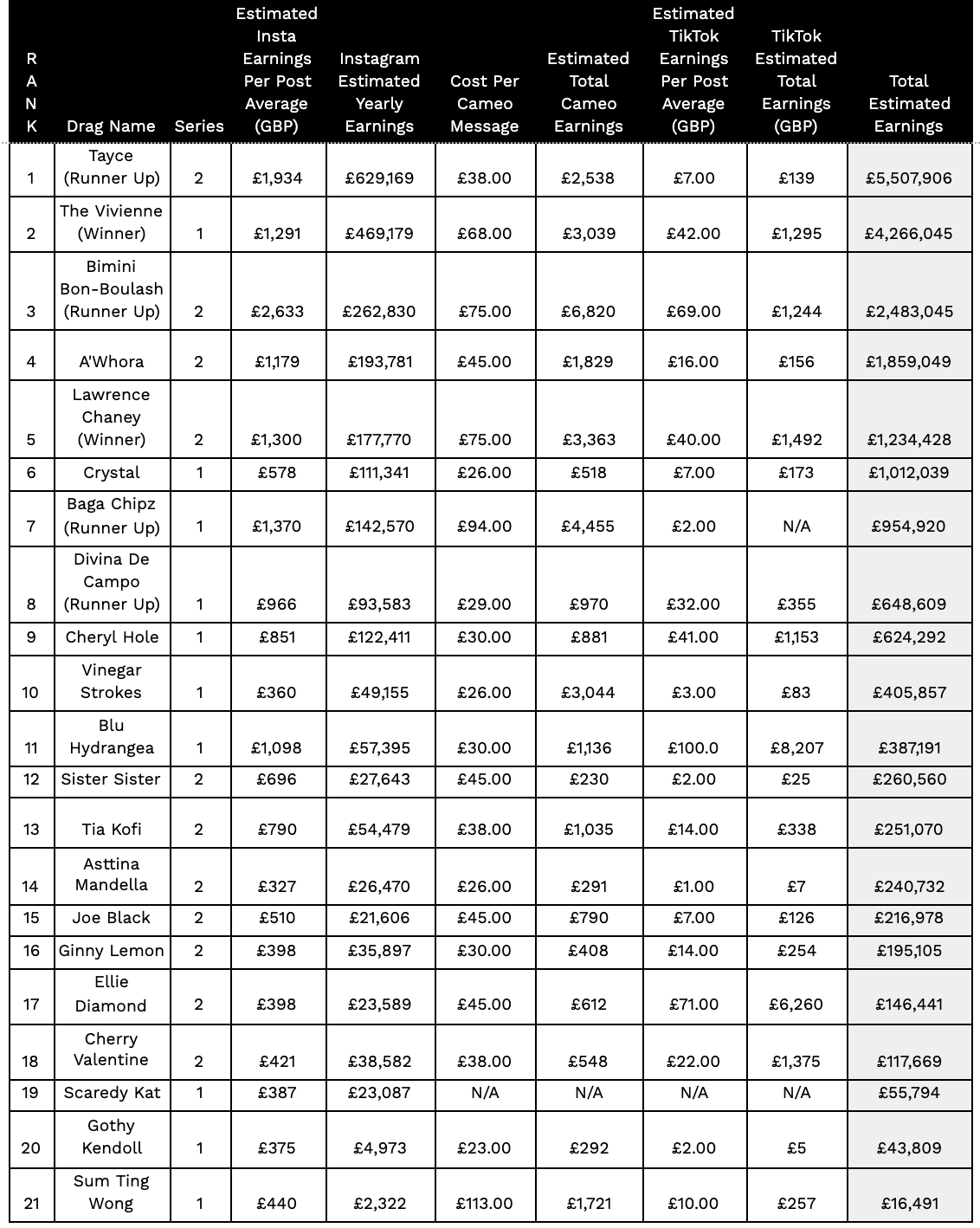 Tayce takes the top spot having earned approximately £5.5 million across the three social platforms. Despite being season two’s runner-up, the drag goddess has over 660k followers on Instagram and is able to charge an impressive £2k per post.

Tayce has gone on to perform across the country, secure several brand partnerships including Coca Cola and Nasty Gal, and walk the runway at London Fashion Week.

The UK’s first-ever drag superstar, The Vivienne, is the second-highest earning queen to date with estimated earnings of £4.2 million. The scouse diva has made several television appearances since, collaborated with make-up brands, and heads the Netflix YouTube series ‘I Like To Watch’.

Joining Tayce in the top three is fellow runner-up Bimini Bon-Boulash with estimated earnings of £2.4 million through Instagram, TikTok and Cameo. Bimini has the most Instagram followers at 910k and earns a huge £2633 per post on average. Similar to Tayce, Bimini has walked the runway at London Fashion Week and secured several brand deals.

The majority of queens who took part in the previous seasons are now earning 6-7 figures through social media, and we expect a lot more from various partnerships, showing just how life-changing the show can be.

Study reveals the best and worst fictional towns from TV land
Television has provided many of us with much-needed escapism over the last year.

How to play Bingo

A complete beginner's guide
Learn how to play bingo & win with MrQ! Find out everything from daubing tickets to calling bingo. Become an expert roomie with our full guide.