The future is bright for a career in technology, with rapid advances opening up a whole new set of jobs that didn’t exist even a year ago.

With cryptocurrencies such as Bitcoin becoming increasingly brought into the mainstream and other tech breakthroughs such as NFTs and the Metaverse taking the world by storm, businesses are increasingly looking to incorporate these into their future models. This makes demand for expertise in these areas extremely high.

But which cities are the best for getting a career in one of these three areas?

We’ve analysed the biggest global cities across the world to determine the best for a career in NFTs, Crypto and the Metaverse. Looking at average salary, number of job vacancies, and number of businesses in these fields, as well as average download speed, the study reveals the best locations for a career in these three extremely exciting sectors.

Singapore ranks as the world’s best city to work in NFTs, followed by London

NFTs are one of the latest topics to take the media by storm, as both businesses and individuals are navigating how it works, and how they can use it for profit. Impacting all industries from retail to gaming, which cities are the best to kickstart your career in NFTs?

The top 10 cities for a career in NFTs

Singapore takes the crown as the best city for a career in NFTs. With the second highest number of jobs in NFTs at 395 (second to Tokyo, Japan), and number of businesses relating to NFTs, Crypto and the metaverse combined sitting at an impressive 352, it’s the perfect location for a career in this field. You’ll also earn the sixth best salary in the world for work in this sector, at an impressive $66,050 (£50,198).

London ranks as the second best city for a career in NFTs. Showing off an even better annual salary than Singapore at $77,400 (£58,824), the future in the UK capital is bright for a career in this up and coming industry.

Tokyo ranks fourth, however is home to the most NFT job vacancies at an impressive 648, which is over 250 more roles than all other cities across the globe.

The highest paying cities for a career in NFTs 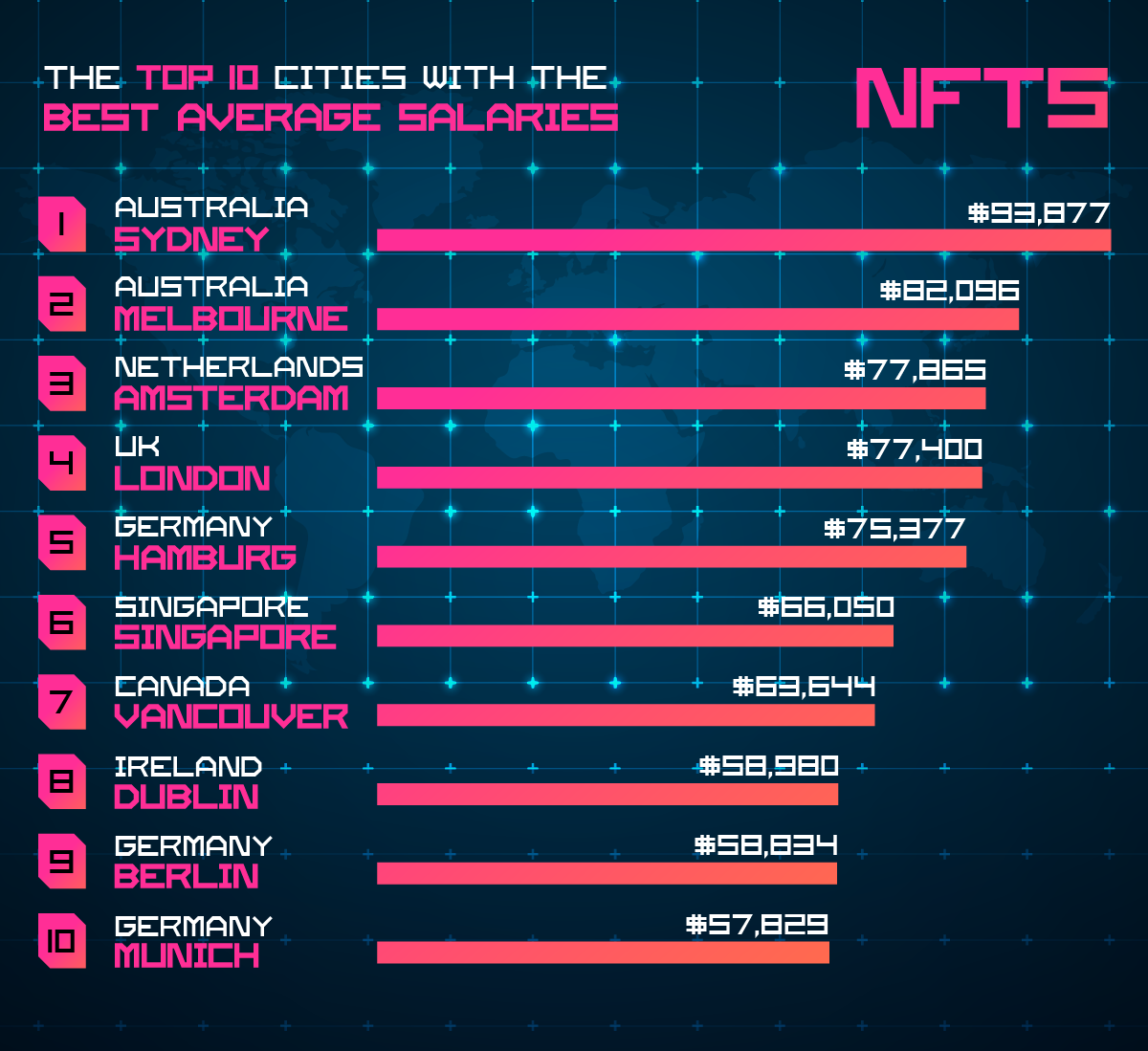 Colombia, Portugal, Mexico and UAE rank as some of the worst paid cities for a career in NFTs.

Crypto has been around for well over a decade, since its invention in 2008 and usage by 2009. Since then, there are now nearly 10,000 cryptocurrencies in existence, ranging from the well known Bitcoin and Ethereum to smaller, newer currencies such as Dogecoin and Cosmos. As this figure continues to grow and more people are using crypto, it’s a booming industry to grow a career in.

The top 10 cities for a career in crypto

The Big Apple, New York City tops the leaderboard as the best city for a career in crypto. Dominating the number of job vacancies available at a whopping 4,729, there is a huge opportunity to excel in this city. It also shows off the eighth best salary in the world for a career in crypto at $125,115 (£95,087).

Oakland, Silicon Valley, L.A, Chicago, Boston, Austin and Seattle all feature in the top 10 cities and are located in the US, making it the best country in the world for a career in cryptocurrency. Singapore and London are the only two locations in the top 10 that are not in the States, and rank fourth and seventh respectively.

The highest paying cities for a career in crypto 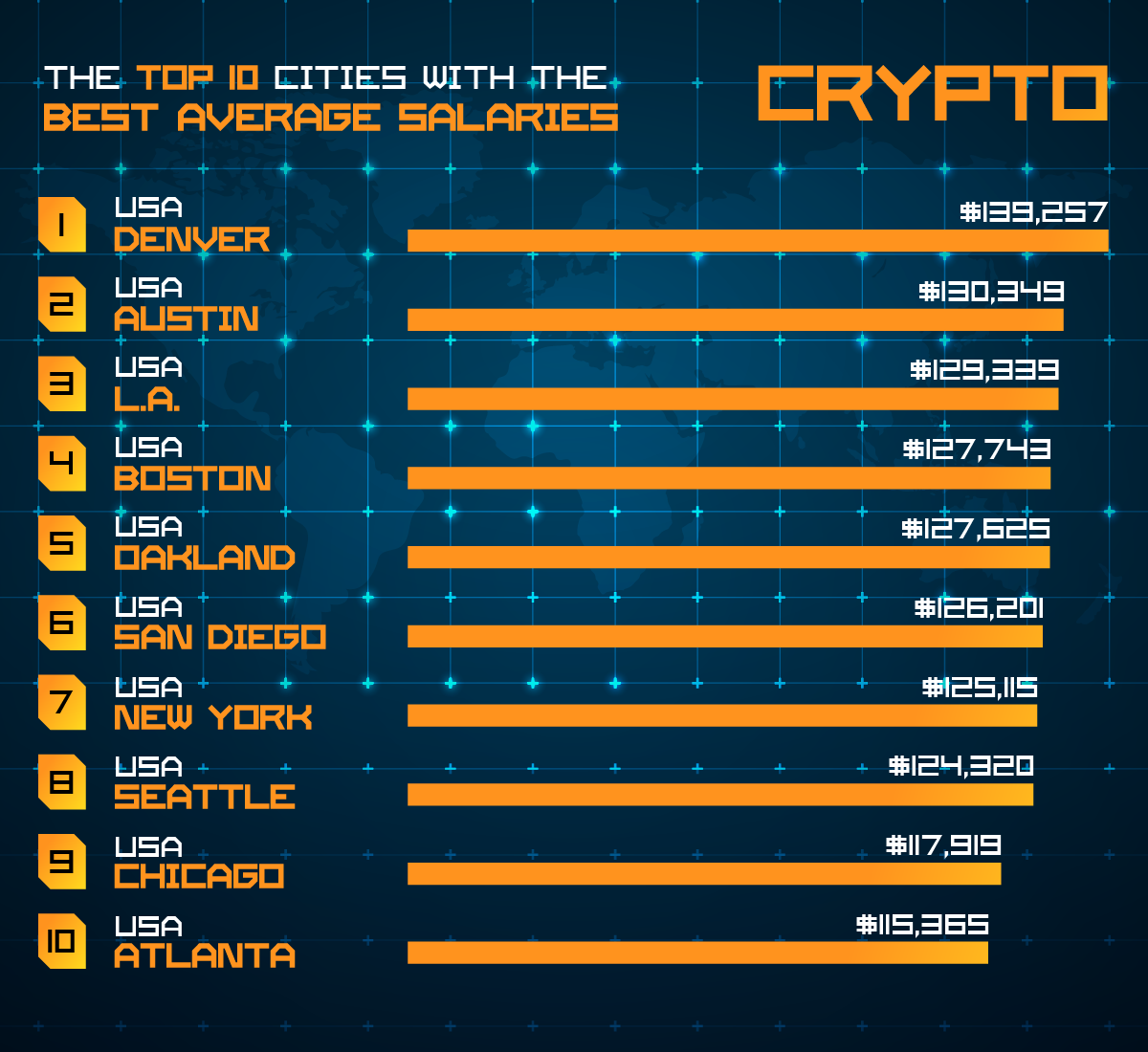 Not only the home to a staggering number of cities ranked the best in the world for crypto, these US cities also dominate the top 10 leaderboard of best salaries with Denver ranking top at $139,257 (£105,835).

Singapore, London and Hong Kong rank as the best cities for a career in the up and coming Metaverse

In 2021, Mark Zuckerberg renamed his global business ‘Facebook’ to ‘Meta Platforms’, and from there declared a commitment to developing a ‘metaverse’. If you’re wondering what the metaverse actually is, it’s a network of 3D virtual worlds that are focussed on a social connection.

Whilst this is in its early development, we wanted to find out what job opportunities there are out there already for a career in this exciting field.

The top 10 cities for a career in the metaverse:

Singapore, London and Hong Kong all take the top three spots as the best locations for a career in the metaverse. All three locations are home to most vacancies, with London coming in top with 332, which is over double Singapore which comes in second at 149.

The highest paying cities for a career in the Metaverse 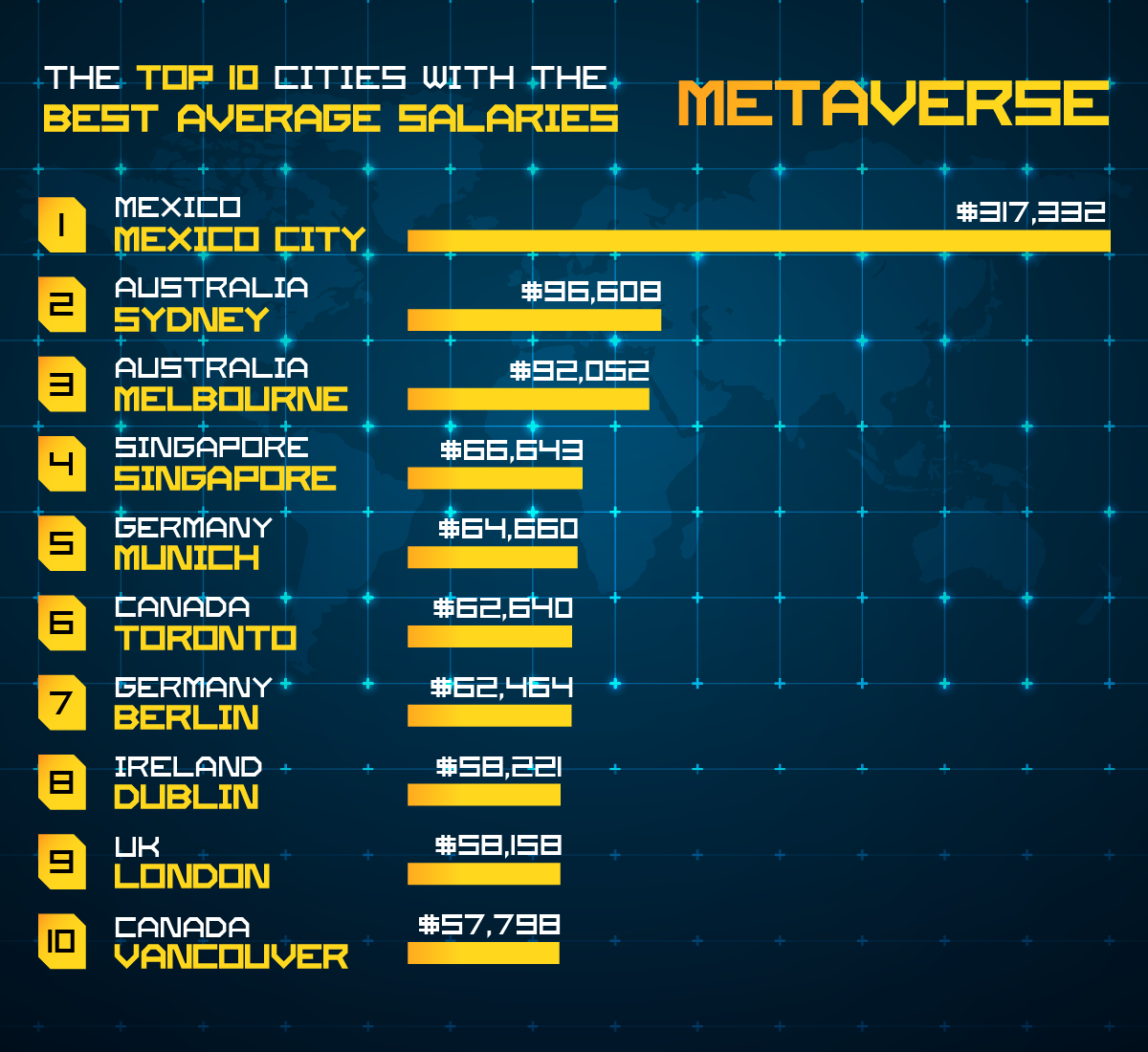 With Mexico City crowned the highest-paying location for a career in the Metaverse, Sydney, Melbourne, Singapore, Munich and Toronto all fall within the top 10 list. London ranks ninth with an average salary of $58,158 (£44,200).

Will you be relocating to take the world of NFTs, crypto and the Metaverse by storm?

Best Songs to Have Sex To