So much of life is down to luck. From big life events like meeting the love of our lives, to smaller things like avoiding the rain or winning at online bingo, chance has a big part to play.

However, nothing has more of an impact on our lives than where we’re born, and the communities we grow up in. These things shape who we are and what we become, but are completely out of our control.

With this in mind, we wanted to discover which towns and cities in the UK are home to the most fortunate inhabitants. We tracked which towns in the country experience the highest rate of big winners of online games. These are wins where the lucky individual has won £1,000 or more.

So, in what locales do the luckiest locals live?

The Luckiest Place in the Country is Wigan! Taking the top spot as the luckiest place in the UK is the town of Wigan, in North West England. With as many as 19 big winners in a town of just 89,000 people, Wigan has the highest number of lucky winners per person. Sitting between Manchester and Liverpool, Wigan is a great place to live. With easy access to the countryside and several major cities, as well as house prices that have risen 8% since 2019, Wiganers can certainly bless their good fortune.

The famous home of the World Pie Eating Championship, Wigan has a vibrant town centre, beautiful scenery and plenty of green space. The area was recently named the happiest of all the boroughs in Greater Manchester, while also recording the lowest anxiety levels. Who knows why this town was graced with such good fortune, suffice to say the locals can have their cake (or pie) and eat it.

Doncaster Doncaster is a town famous for horse racing and is home to one of the oldest racecourses in the world. It appears the air of luck and hopes of the crowds have left their mark on the locals, who are now ranked as the second luckiest in the country.

Bolton Sweeping in to claim third place is Bolton, with a big winner rate of 17.9. The birthplace of many famous faces, from comedians Peter Kay and Paddy McGuinness to boxing legend Amir Khan, Boltonians have a lot to be proud of. Last year Bolton was also ranked as the fifth-best place in the country to raise a family, showing you really would be lucky to call this town home. 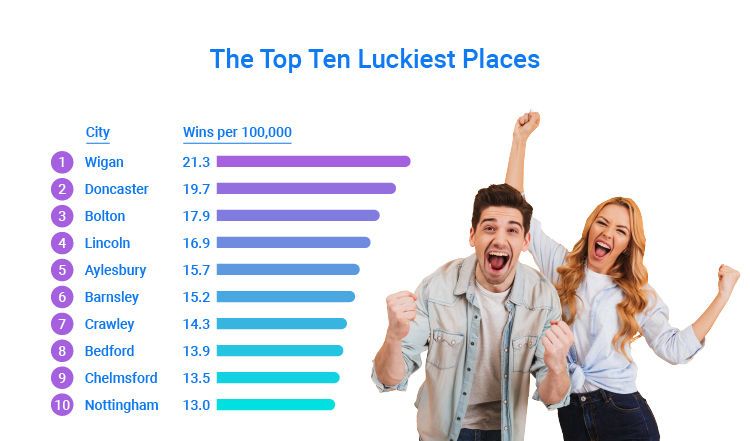 Across the Rest of the Country

We analysed MrQ’s internal data to reveal where the most wins of £1,000+ happen in the UK. We then measured this against the local population to find the win rate per 100,000. This rate is presented as a simple score, allowing us to rank the towns in order of luck, and revealing the luckiest town in the UK.

Everything you need to know
Experience the table casino classic like you never have before. Swap and trade to beat the dealer.