What started out as an innocent name, ‘Karen’ is now a pejorative term used to describe ‘an uptight, middle-aged woman that wants to speak to the manager’*, according to definitions online. But is this really accurate? Are Karens the worst of us all when it comes to online complaints?

We’ve analysed almost 80,000 negative reviews on Trustpilot and TripAdvisor for some of the most popular brands, dining venues, tourist attractions, and supermarkets, to reveal the people most likely to submit a complaint.

Over the last few years ‘being a Karen’ has turned into an online meme, with people posting videos on social media of people lashing out at others for no good reason. But when it comes to leaving negative reviews on the Internet, which names top the list? 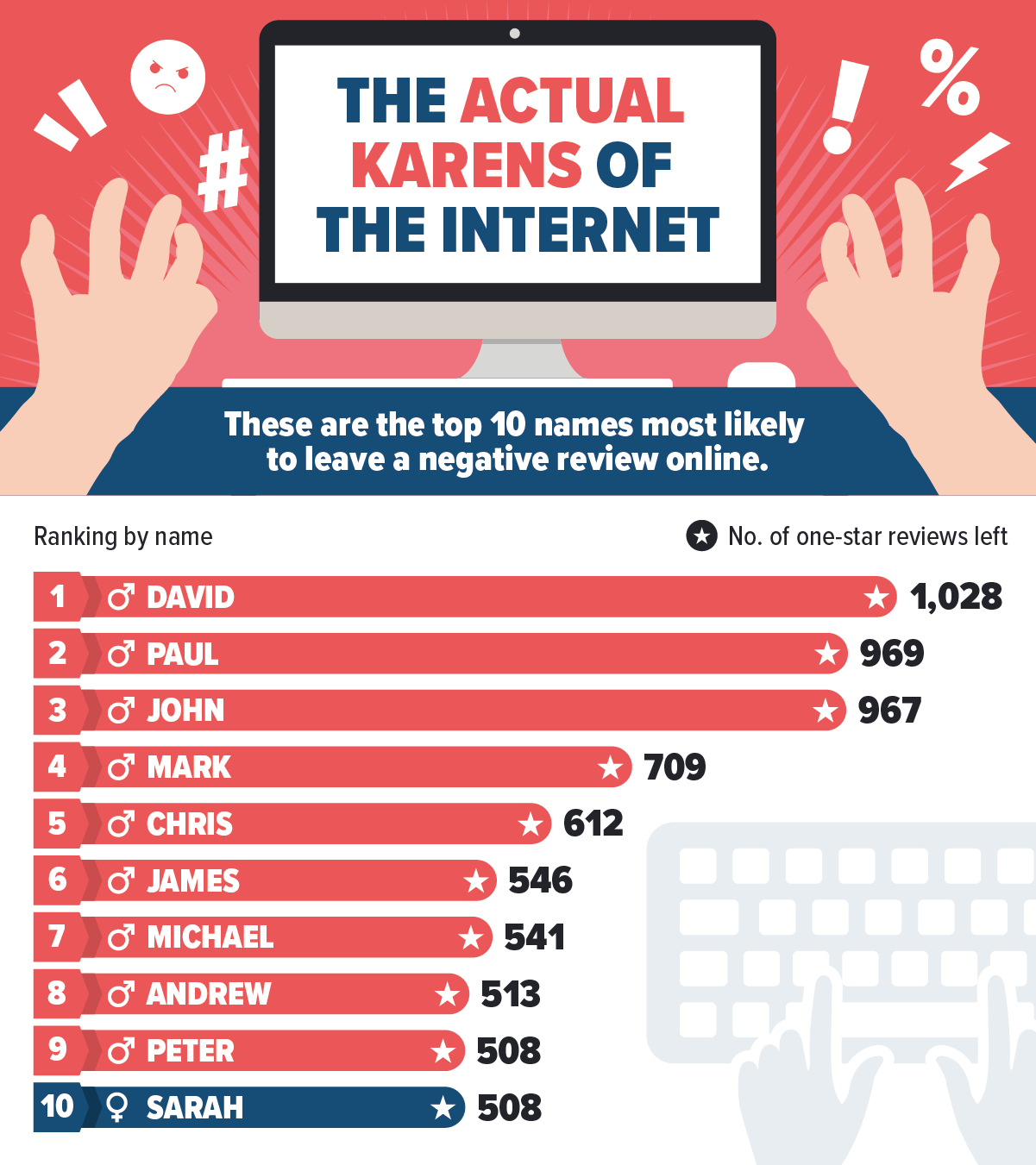 Davids rank as the biggest complainers on the Internet

Male names dominate the top 10 list when it comes to complaining online, with David taking the lead with a total of 1,028 reviews. This is followed by Paul and John, with 969 and 967 reviews respectively. Sarah rounds off the top 10 and is also the top female name most likely to leave a scolding review, with 0.6% of all reviews analysed coming from a ‘Sarah’.

Results show Karens really do complain one of the most online, coming in as the second-highest female name to leave a bad review

Overall, men are 131% more likely to complain online than women, but which female names leave the most negative reviews?

While there are people that object to being called a ‘Karen’, the trend does in fact live up to its name as it comes in second place for most likely to complain online (with 373 negative reviews). Interestingly, more old-fashioned names such as Julie, Susan, and Karen rank as the biggest complainers, compared to more millennial names such as Daisy.

Lakeland, Home Bargains and Oak Furnitureland rank as the most loved brands according to reviews data

Lakeland is crowned the UK’s most loved brand on the internet, with just 1% of over 77,000 reviews receiving one star, closely followed by the discount store Home Bargains (3%). On the other end of the scale, toy retailer Hamleys has the least satisfied customers, with an astounding 89% of all reviews being negative with just 1 star.

The supermarkets with the biggest complaints online, with Asda receiving the most scolding reviews

We analysed nine of the UK’s major supermarkets to determine which receive the highest percentage of 1% reviews on the internet.

Asda takes the lead as the UK’s supermarket with the most negative reviews, with an astonishing 75% of its almost 10,000 reviews receiving just one star. While major British retailer Marks and Spencers comes in second place, its total number of reviews is substantially lower compared to other supermarkets at just 314. Of the nine supermarkets analysed, Waitrose comes out on top with 52% of all reviews being negative.

Once again, men are more likely to leave one-star reviews for supermarket brands, with people named John leaving the highest number of complaints.

While many people may manage their expectations when visiting a fast-food chain, a large percentage of customers visiting some of the world’s most famous establishments were clearly very unhappy with their visit. We analysed 20 popular dining venues and found KFC tops the list with almost 80% of all reviews being negative. Burger King followed closely at 74%, and the pizza chain Papa John’s at 73%.

On the other end of the scale, Krispy Kreme and Frankie & Benny’s had the lowest ratio of one-star reviews, with 30% and 32% respectively.

The most complained about tourist attractions around the world

We also looked at 27 of the world’s most iconic tourist attractions, analysing their one and two-star reviews on TripAdvisor to reveal which attractions get reviewed the worst.

Many of us dream of travelling the world and feasting our eyes upon the most iconic attractions. However, our research revealed that some of the most famous landmarks are perhaps not all they’re cracked up to be. In first place, the Hollywood Walk of Fame was revealed to be the most complained about tourist attraction with 20% of its reviews receiving just one or two stars, followed by the Palace of Versailles and Stonehenge. Meanwhile, the Great Wall of China is the least complained about attraction with just 114 of its 23,785 reviews rated with one or two stars. The internet has facilitated sharing our opinions online - both positive and negative - and with social media at the tip of our fingers, it’s unlikely that this way of living will go away anytime soon. So, will being a ‘David’ replace the trend of the ‘Karen’? Let us know if you’ve seen any Davids or Karens recently.

Top 12 Roulette Playing Strategies
Compiling the top 12 Roulette strategies that can help supercharge your Roulette experience. Get the knowledge and become a table casino pro in minutes.