Who are the most popular women on Twitch in 2021?

Twitch is the leading streaming platform for gamers all over the world who want to share their experiences with thousands of adoring fans. Traditionally, the gaming world is seen as a male-dominated one, however, in 2021 there are many big-name female Twitch streamers taking the platform by storm. 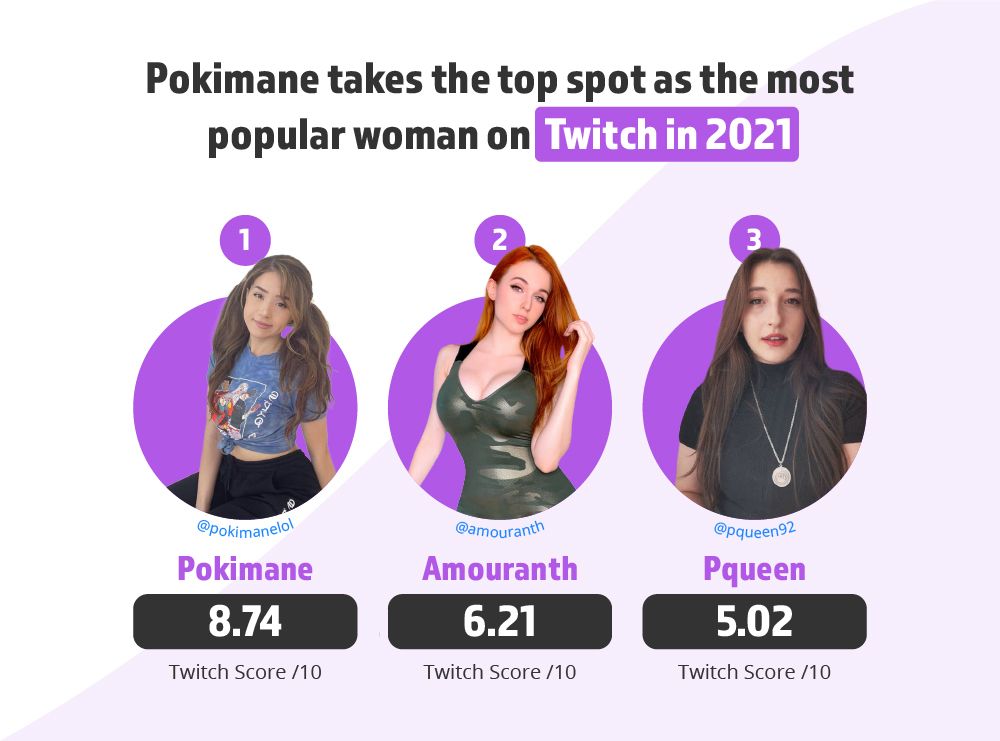 Pokimane According to Social Blade’s Top 100 Most Followed Twitch Accounts, Pokimane is the 6th most followed streamer on Twitch, among the ranks of Ninja, shroud and Tfue, with 8 million and counting Twitch followers. Pokimane streams a variety of video games including Fortnite, League of Legends, and Among Us and over the last year has seen an average of 285,742 Twitch views for her streams.

Amouranth A more controversial Twitch streamer, who has been banned and unbanned from the platform on four separate occasions at the time of writing is Kaitlyn Michelle Siragusa, online known as Amouranth. Often found streaming in the new Pools, Hot Tubs and Beaches category of the platform, Amouranth also can be found streaming ASMR for her 3,821,163 Twitch followers.

Pqueen The Turkish variety streamer Pqueen takes the third spot on our most popular female Twitch streamer list. With over 1.6 million Twitch followers and over 6 million Instagram followers, Pqueen has one of the largest social followings of all of the women on our list!

Check out our full list of popular female Twitch streamers below to see if your favourite made our list! 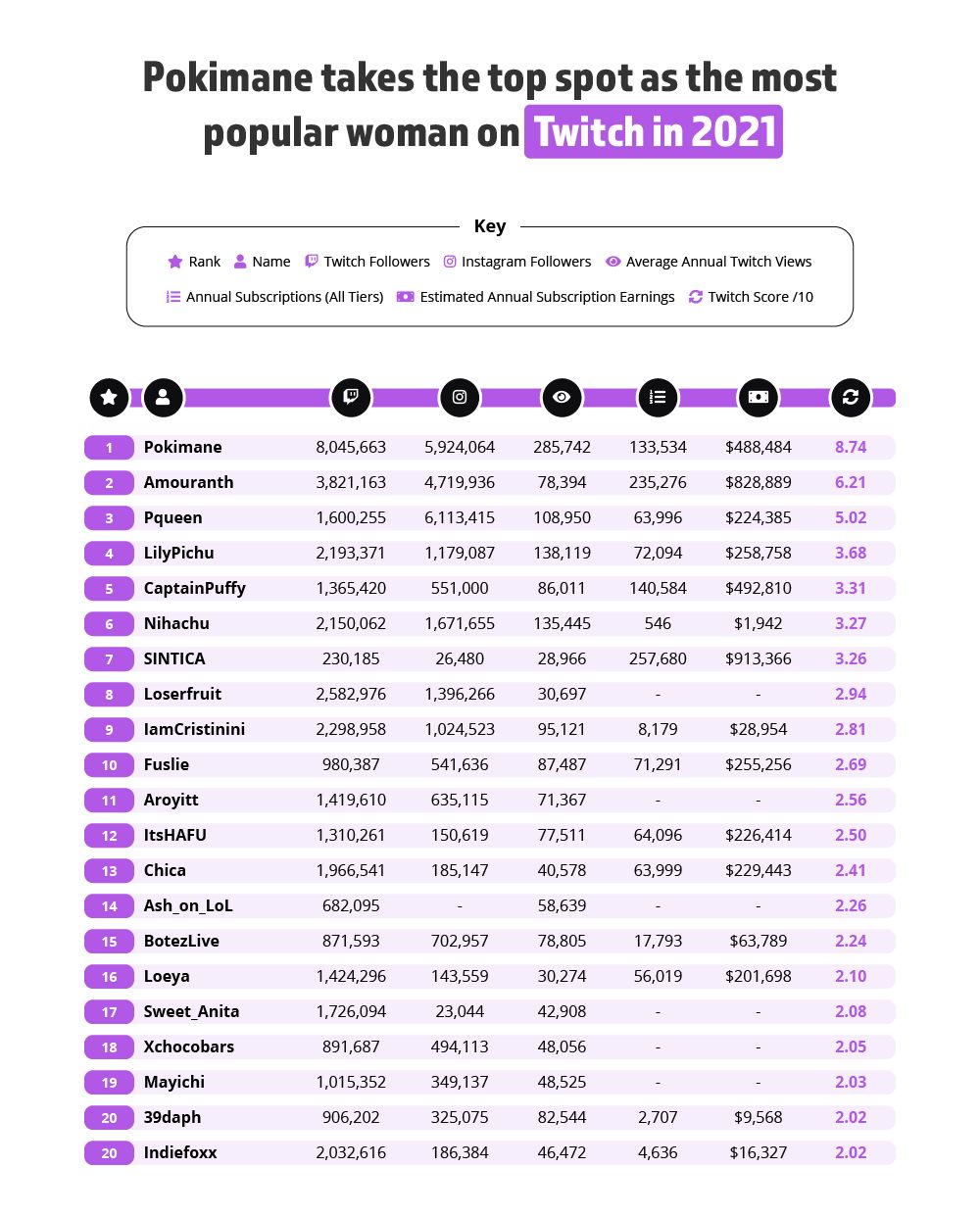 Taking a look at our research a little deeper, we discovered that the highest-earning female Twitch streamer from the last year is the German DJ, Producers and streamer Sintica. Earning a staggering estimated $913,365.74 from Twitch subscriptions alone, Sintica can usually be found streaming DJ sets or Just Chatting to her 230,185 Twitch followers. 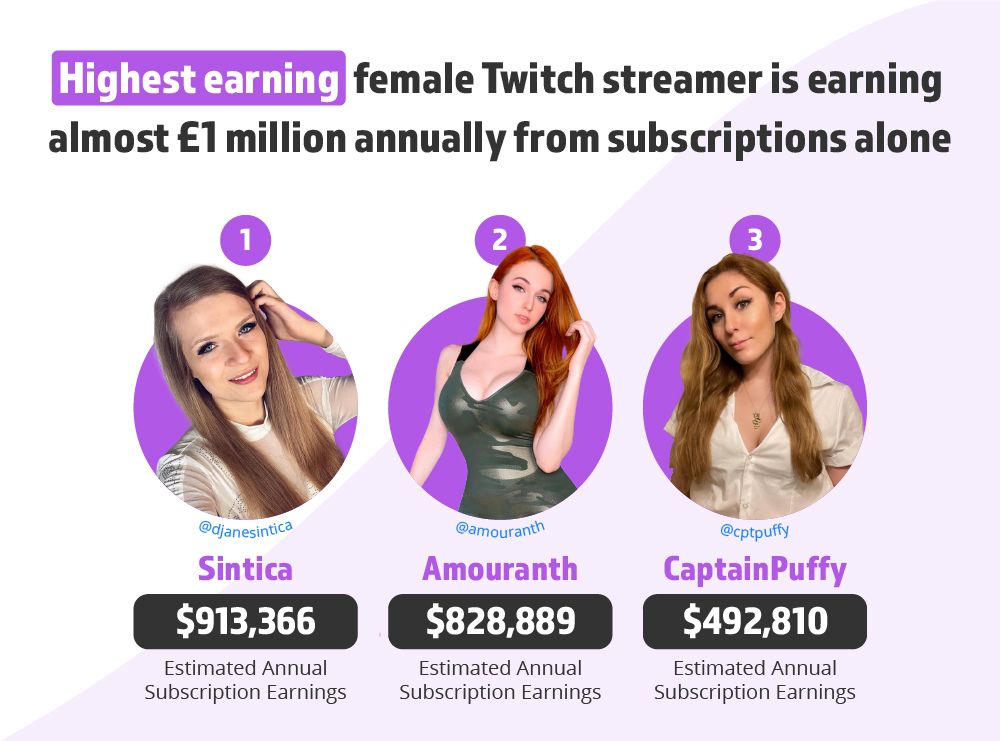 The top 3 most popular female streamers have over 31 million followers on social media between them! 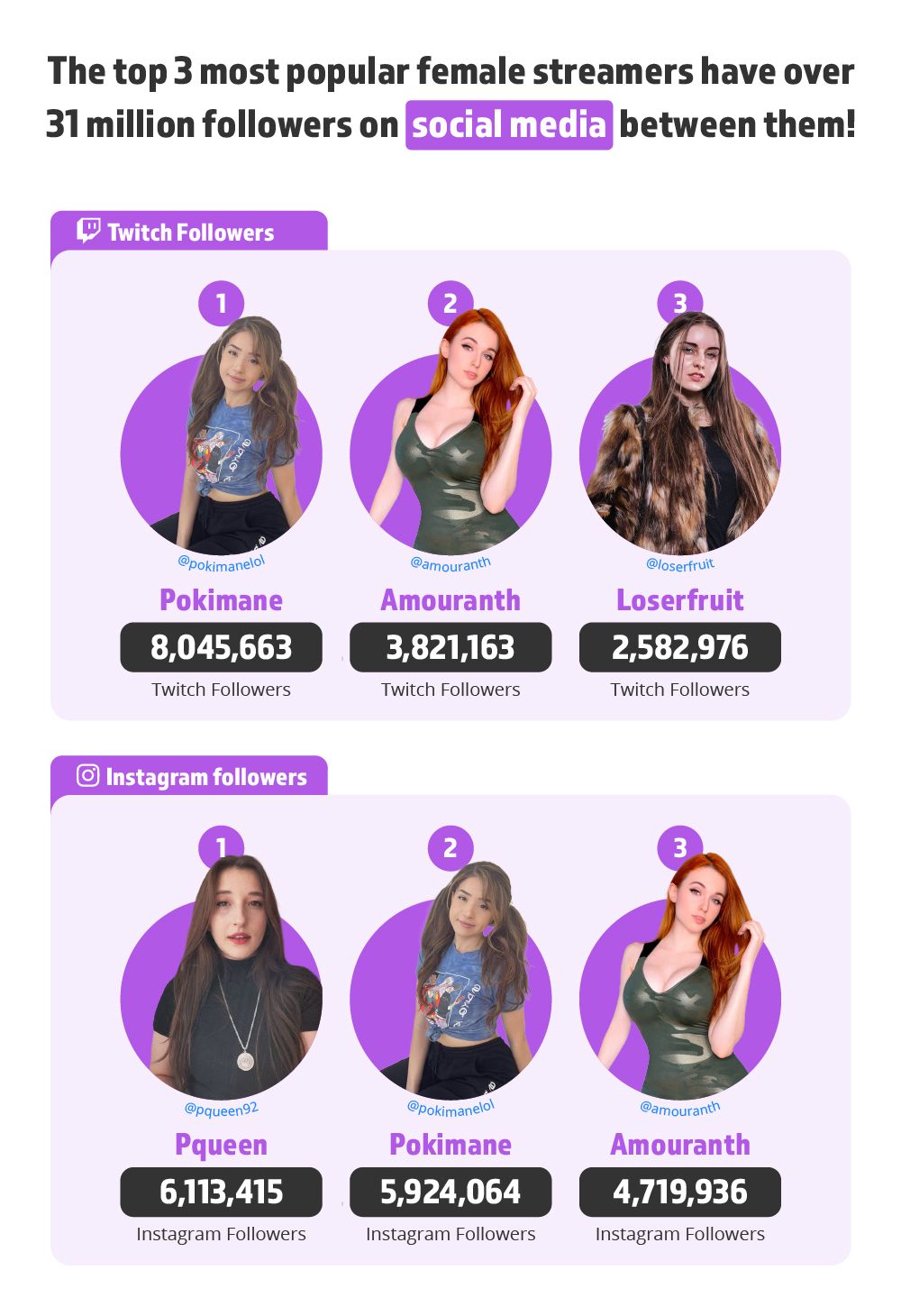 Pokimane also takes home the crown as the most-watched female streamer with an average annual viewership of 285,742, which is almost double the viewership of LilyPichu in second place. 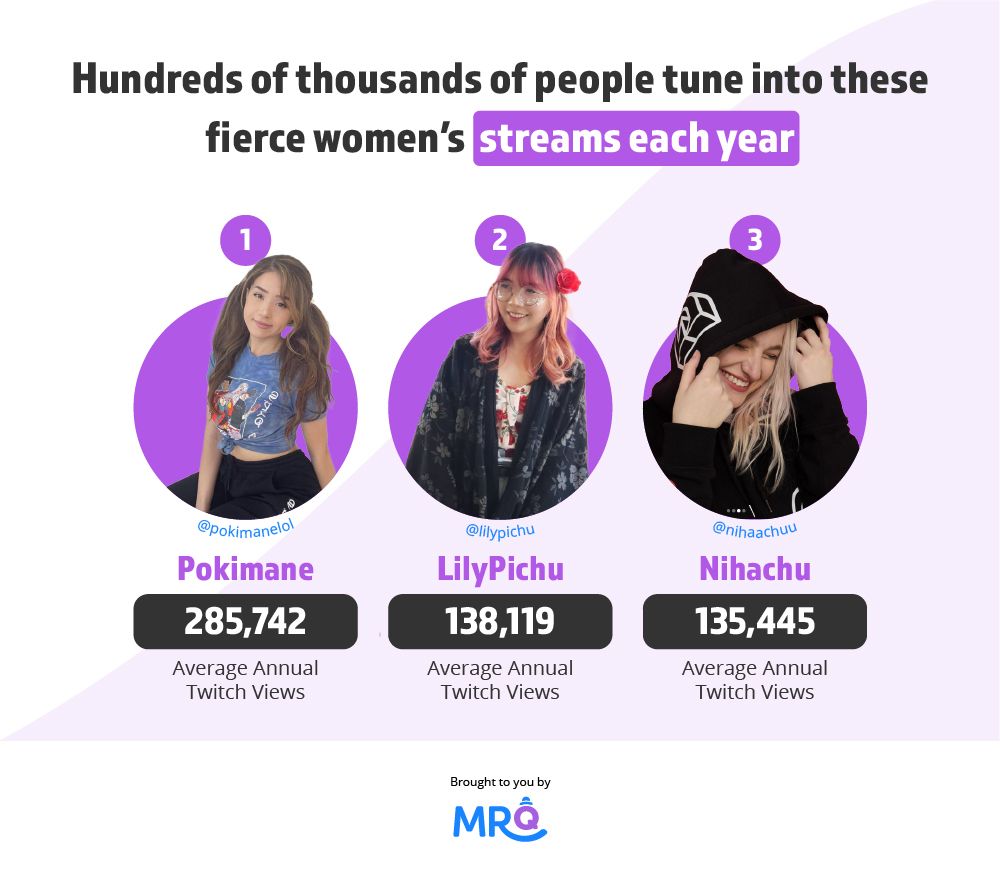 Using a variety of sources, we collected a list of 47 notable female streamers that are currently or have streamed on Twitch, giving each a normalised score out of ten on each of the following factors, before taking an average across all four factors for our final Twitch Score out of 10. Note that if figures were unavailable for any factors for any of the streamers, these factors were excluded from the final average.

Using TwitchTracker, each streamer’s Twitch follower count, average annual Twitch views and the number of subscriptions broken down by tier were collected and analysed to create the index. Streamers on Twitch can make money from multiple different revenue streams, however, we’ve chosen to focus purely on income from subscriptions as it’s the only avenue that can be estimated with a degree of accuracy.

Subscribers to Twitch streamers can choose from three levels of subscription, costing $5, $10 and $25. According to popular streamer Disguised Toast, Twitch keeps 30% of this revenue for themselves, with the streamer taking the other 70%.

We used the number of subscribers from August 2020 to July 2021 as the average each streamer would get over a year to calculate estimated annual income from subscriptions, before calculating the 70% that goes to the streamers. Some streamers did not have a full year worth of data due to them being new, returning to the platform, or the data for that individual just not being made public. The average Twitch views figures are also from the same August 2020 to July 2021 period.

Crowning the Karen's of 2022
'Can I speak to the Manager please?'

How to play Slingo

Learn Slingo skills in seconds!
Learn how to win on Slingo in minutes with our 5 step guide! Full Slingo slot game guide with tips, tricks and the best games from MrQ.

Highest RTP slots and casino games you can play online today
Find out the slots and games with the highest RTP on MrQ. Did your favourite make the list?