Television has provided many of us with much-needed escapism over the last year. From iconic US dramas to beloved homegrown soaps, we have often lost ourselves in fictional worlds like the Mancunian suburb of Weatherfield in ‘Coronation Street’, the affluent Rosewood from ‘Pretty Little Liars’ or the once sleepy rural town of Hawkins, Indiana from Netflix’s smash hit ‘Stranger Things’.

If they were real, however, which of these famous fictional towns would be the best and worst to live in? MrQ studied 20 of the most well-known television shows set in fictional towns to reveal the answer.

Analysing thousands of episodes, the research investigated the average crime rates, salaries, commerce and culture in each fictional place. From there, they assigned a numerical score out of ten based on their performance in each category and used the average to determine which are, in fact, the best and worst TV towns to live in.

The best overall TV towns to live in 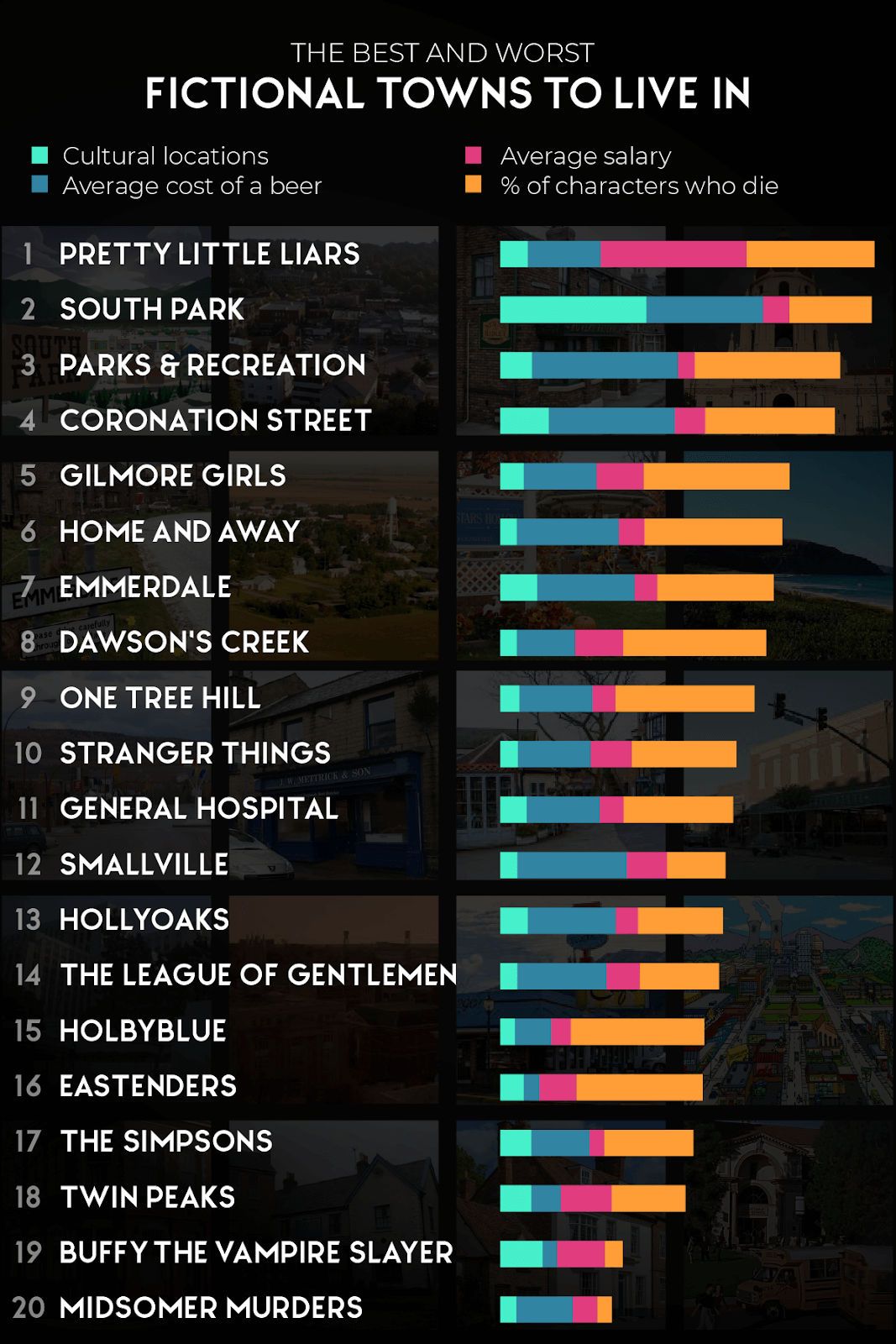 Rosewood, the setting of binge-worthy teen drama ‘Pretty Little Lies’ has been revealed as the best fictional town to live in. An analysis into the average salary of its characters found that Rosewood residents are earning an average of £145,000 per year in this affluent Pennsylvania suburb. Meanwhile, a relatively low 4.2% of its characters were killed off during the show and its cultural spots, such as the Apple Rose Grille and The Radley hotel, make it a perfect place to settle down.

Landing at the bottom of the list, however, is the seemingly quaint Midsomer. It might look like any ordinary English county, but it’s unusually prone to serial killings—459 across its 128 episodes. This was not the only reason for Midsomer ranking at the bottom of the study though; it also lacks culture with just half a dozen shops, hotels and pubs to provide respite from all the bloodshed. Furthermore, MrQ estimates that the average salary of Midsomer’s residents is a measly £27,000.

Which are the most dangerous TV towns? 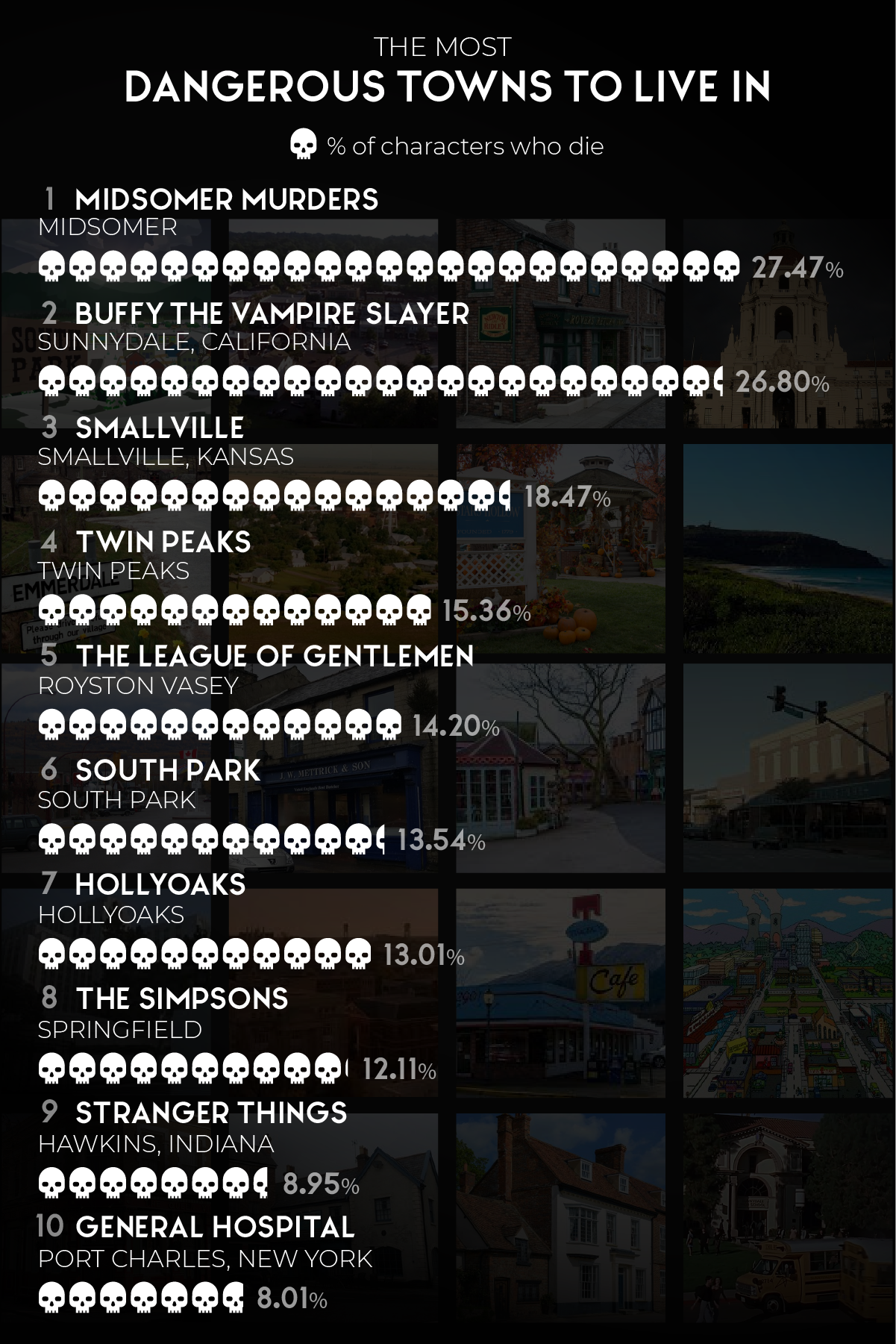 Midsomer was also revealed as the most dangerous TV town owing to its many, many murders. With over a quarter of the people who live there (27.4%) having met a grizzly demise, it begs the question ‘why would anyone choose to move to Midsomer?’.

‘Buffy The Vampire Slayer’s Sunnydale, with its hoards of vampires and demons, still couldn’t knock Midsomer off its bottom spot, landing just below it as the second most dangerous fictional town to live in. Located on the idyllic Californian coast, Sunnydale might seem like the perfect place on the surface. Less appealing, however, is what’s under the surface. Sunnydale just happens to also be located on top of a Hellmouth, a gateway between the Earth and the various demonic realms making it a hotbed of vampires, werewolves and every other horrid monster imaginable. Even with Buffy to protect it, its residents have a one in four chance (26.8%) of surviving there.

On the other hand, the least dangerous fictional town is ‘Gilmore Girls’s Stars Hollow. With just 0.5% of Stars Hollow’s residents being killed off, the only thing to fear in this delightful Connecticut town is passing out during the annual 24-hour dance marathon. Meanwhile, the second least dangerous place is the equally lovely town of Pawnee, Indiana from ‘Parks And Recreation’ where 0.6% of residents are killed off.

Another interesting location which featured among the most dangerous towns was Hawkins, Indiana from Netflix’s ‘Stranger Things’. After otherworldly powers transform this once quiet town, almost 9% of Hawkins’s residents are killed off over the course of the show. There may be many more too with ‘Stranger Things’s highly-anticipated fourth season due to arrive in 2022.

In which fictional town would you earn the most money?

The upper middle class town of Rosewood, Pennsylvania where ‘Pretty Little Liars’ takes place boasts the highest average salary of the fictional towns studied. If you were to live there, your average annual salary would be just shy of $200,000 (or £145,000) with just some of the notable residents working as doctors, lawyers, bankers and college professors.

At the bottom of the list is Springfield from ‘The Simpsons’. Aside from resident billionaire Mr. Burns, much of this small town, whose precise location is still a mystery after 30 years of being on the air, is bringing home a low annual income. The average Springfieldian will earn just $25,000 (or £18,000) every year. Interestingly, this makes The Simpsons’ star Homer one of the town’s highest earners as in one episode he claims to earn $60,000 (£43,000) per year.

Which fictional town has the most culture and commerce?

Surprisingly, the quiet little mountain town of South Park came out top of the study as TV’s most cultured town. Across its 23 seasons, it has somewhat inexplicably proven itself to be a cultural hub. There are over 200 cultural spots in South Park including its bustling Main Street, restaurants such as City Wok and the Bijou Cinema which has, among other things, hosted its own film festival.

The full table can be found here:

We have analysed some of the world's most iconic fictional towns from TV and analysed them by a series of metrics to determine which are the best to live in. Analysing the number of cultural locations (eg restaurants, museums. pubs, etc.), average cost of a beer, average salary, and number of deaths, we have determined the best and worst fictional towns of all time.

How to play Bingo

A complete beginner's guide
Learn how to play bingo & win with MrQ! Find out everything from daubing tickets to calling bingo. Become an expert roomie with our full guide.

How to Play Online Bingo with Friends

Setting up the perfect bingo night
Play exciting bingo games online with your friends. Everything you need to know for your next online bingo night.