Cities are known for their hustle and bustle, which can be overwhelming for those who favour solitude over socialising. Even with the world opening up again, some might still prefer a more self-contained lifestyle.

But which city is the best place for those who are more introverted than extroverted, and prefer to fly through life solo?

To find out, we’ve analysed 50 cities and measured them against several metrics that may be important to introverts, including population density, solo leisure activities, the average cost of renting a one-bedroom apartment, average salary, as well as the number of remote jobs. 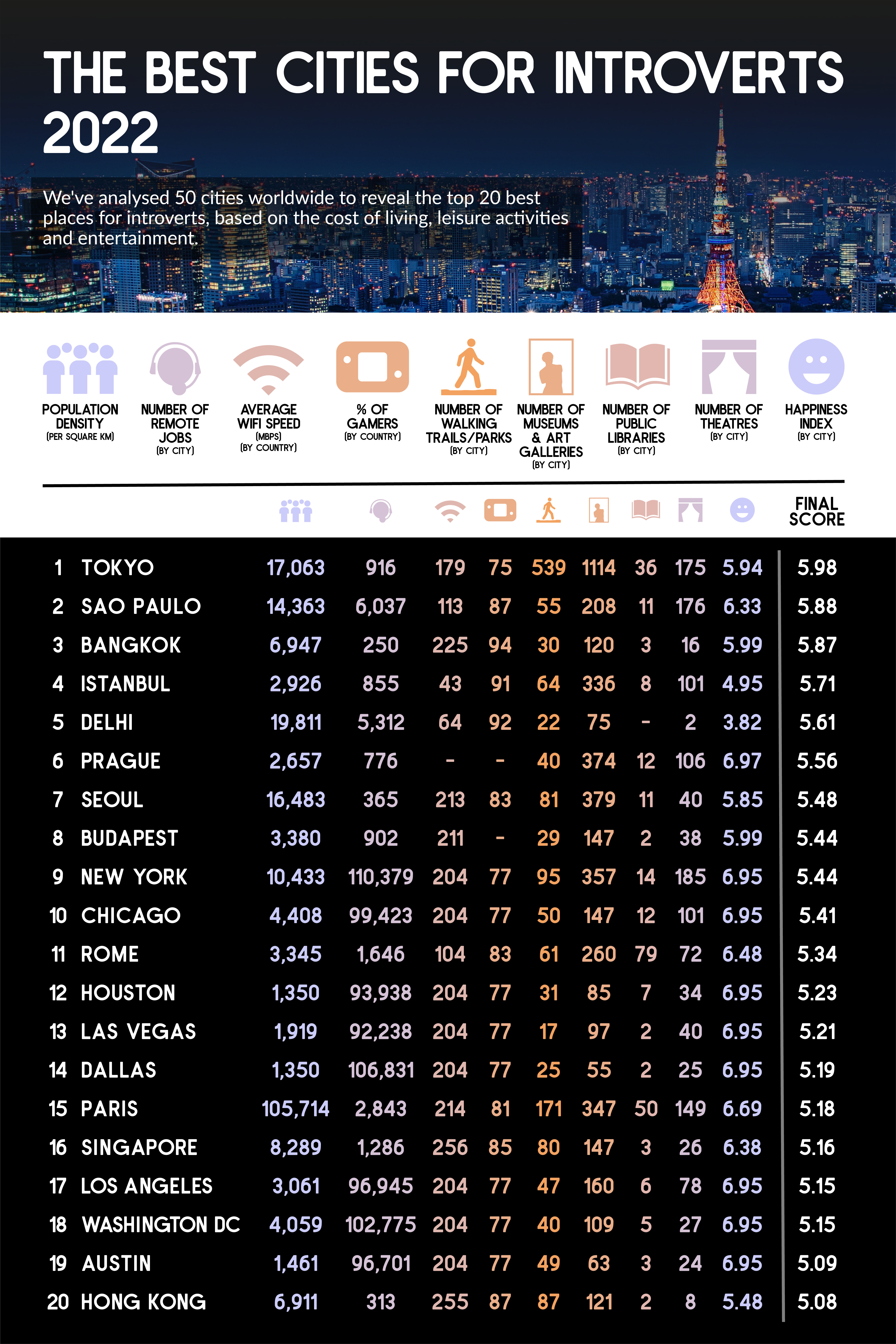 The capital of Japan (Tokyo) takes the crown as the best overall city for introverts. Despite having the highest overall population, in terms of population density it actually ranks tenth with just over 17,000 people per square kilometer. A city known for its beautiful public gardens, it won’t come as a surprise that Tokyo has the highest number of parks and walking trails of all cities analysed (539), more than double London (163) or Paris (171) have to offer. The metropolis also has the most museums and art galleries, perfect for those who want to learn more about the culture, with over 1,100 to choose from.

Sao Paulo in Brazil, a city famously known for being a melting pot of cultures, ranks in second place. The entertainment capital of South America positions fourth for its high gaming population (87%) and third for the number of theatres to enjoy (176).

Bangkok, Thailand is the third-best city for solo living despite having the third-lowest average salary of $557.04 (£423.7) per month and being the second least-friendly place for remote working, with just 250 work-from-home jobs listed. However, the country has the largest gaming community with 94% of internet users playing video games, as well as one of the fastest WiFi speeds with 225.17 Mbps - which is crucial if you’re gaming online.

Out of the 50 cities analysed, Zurich is revealed as the worst location for introverts. This is due to a high cost of living, as well as few solo activities available, such as a low number of public libraries (3), theatres (11) and walking trails and parks (14). Munich, Germany and Dublin follow Zurich at the bottom of the ranking.

The cost to live alone is cheapest in Delhi, with rent costing 161% less than Zurich

The cheapest city for introverts to live in a central location is in Delhi, India. The cost of a one-bedroom apartment is just $230.16 (£175), which is 182% lower than Abu Dhabi in the United Arab Emirates, the most expensive place to rent a property of the same size.

On the other end of the scale, these are the top five cities with the highest cost of living:

If the last couple of years has taught us anything, it’s that many of us can get by without seeing other human beings. While the cities in the ranking are busy hotspots, there are plenty of cost-effective locations and solo activities to keep your introverted self happy.

How to play Craps

Master Craps in under 10 minutes
Discover everything you need to know about mastering one of the oldest table casino games available today. All of the top tips and steps to help you become a Craps pro.

MrQ is back on the gogglebox with a brand new ad
MrQ has launched a brand new TV ad. Check out the excitement including an exclusive sneak peek.

Apply now for your new dream job!
Do you want to sip delicious cocktails and enjoy amazing views of England’s capital? Then we want to hear from you!