2020 may have been a pretty rough year for all of us, but as the fun-loving home of online bingo, we like to see the brighter side of things! While we may have been cooped up in our homes, we had plenty of great TV to enjoy.

While we were spending our Friday nights on Zoom and our days hammering the group chats, there was one thing that we could all spend our time discussing - the latest Netflix release.

From shocking docu-series to captivating thrillers, the streaming platform kept us going through lockdown and beyond. So which Netflix releases had us talking the most?

The Most Talked About Netflix Releases 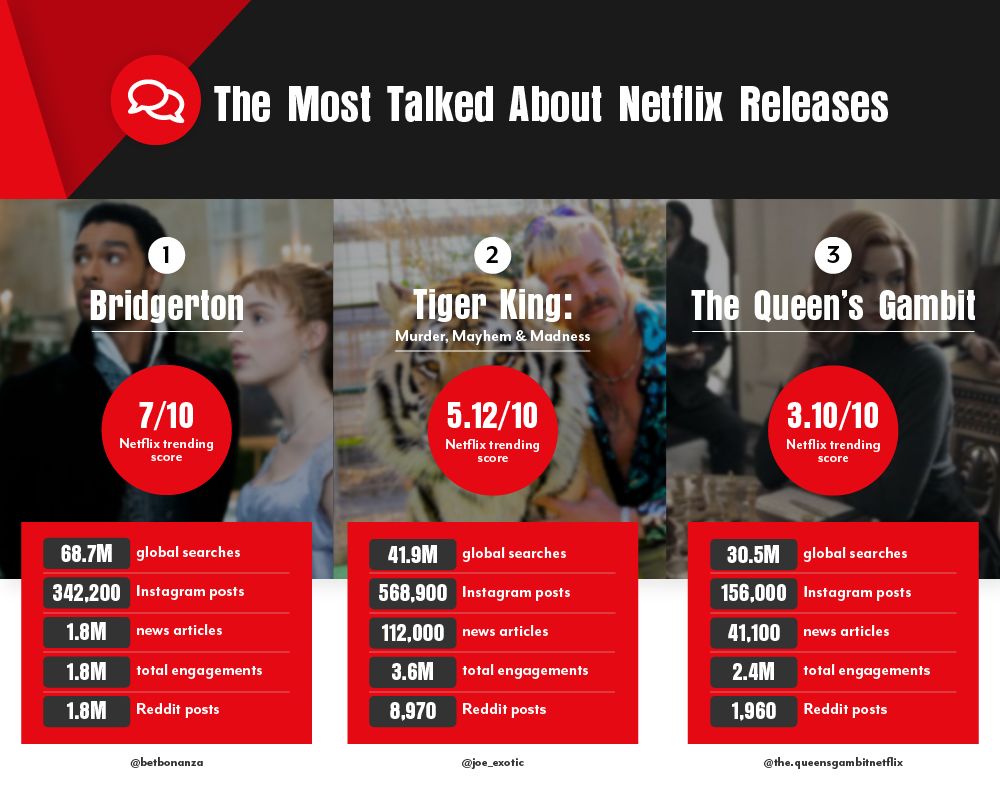 Looking at the Netflix original releases since January 2020 we can spot the shows and movies that we couldn’t get enough of. By taking the global search volume, Instagram posts, the number of news articles written about them, and more we’ve created a Netflix trending score to rank the most talked-about releases.

For us Lady Whistledown fans, the release sat in the top spot will come as no surprise. This whimsical period drama launched a number of previously unknown cast members into the spotlight and even inspired a spin-off concept musical album.

With more than 68 million Google searches for the series since the beginning of 2020 and 1.8 million news articles written about the show, we were all talking about the characters, the mystery identity of Lady Whistledown, and, of course, the Duke.

The murder, mayhem and madness of this docu-series gripped the whole world in 2020 and got everyone talking. From the conspiracies to the mullets, everything about Tiger King was bizarre and incredible.

This show certainly got viewers talking about it with more than 568,000 Instagram posts and nearly 42 million global searches.

Who could have predicted that 2020 would see a show about chess become a viral sensation? Well that’s exactly what happened in the form of The Queen’s Gambit, a series that made the game stylish.

With 2.4 million comments, likes, shares and other types of engagement on articles about the series, it is one of the most talked about Netflix releases from 2020. 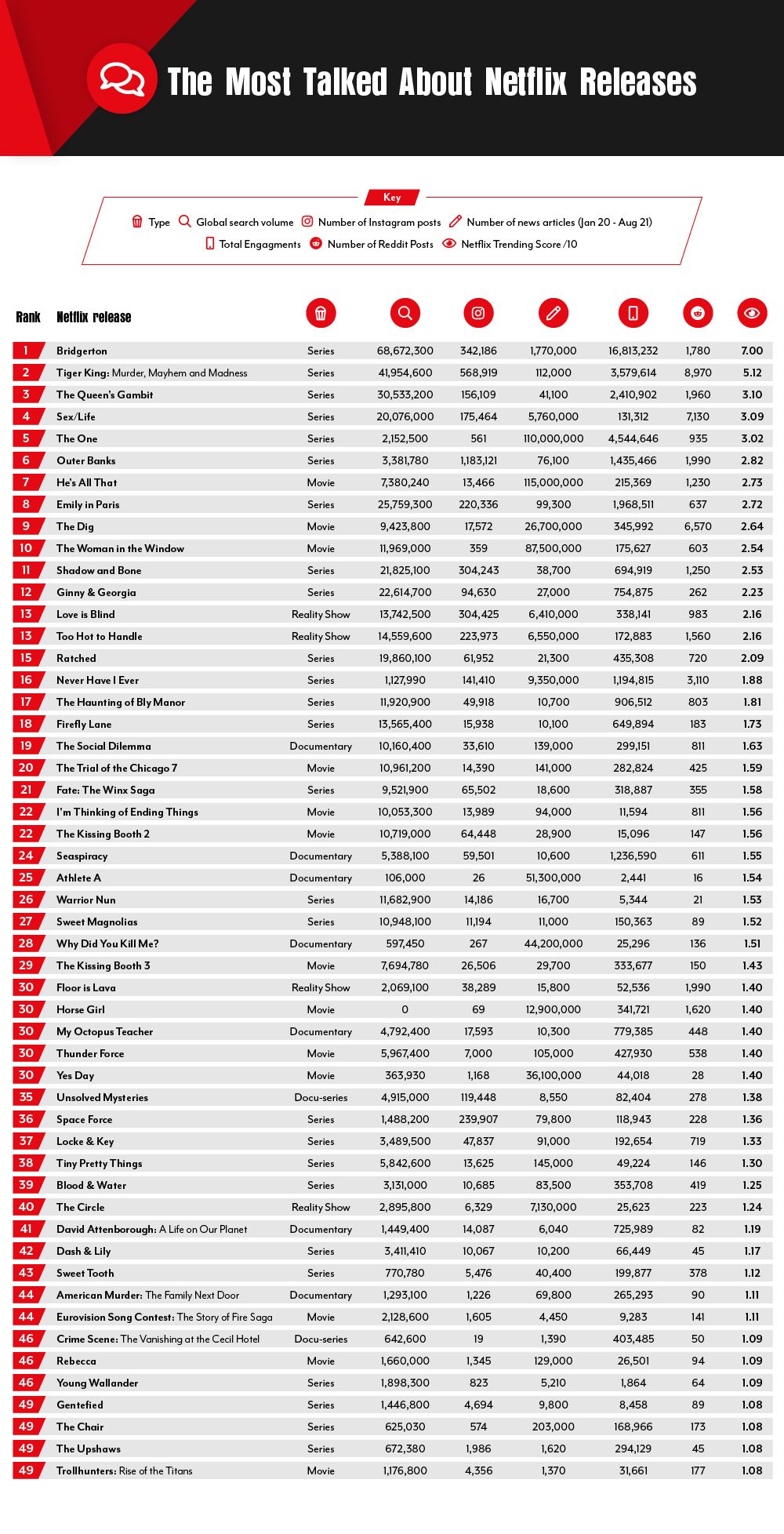 The most searched for releases 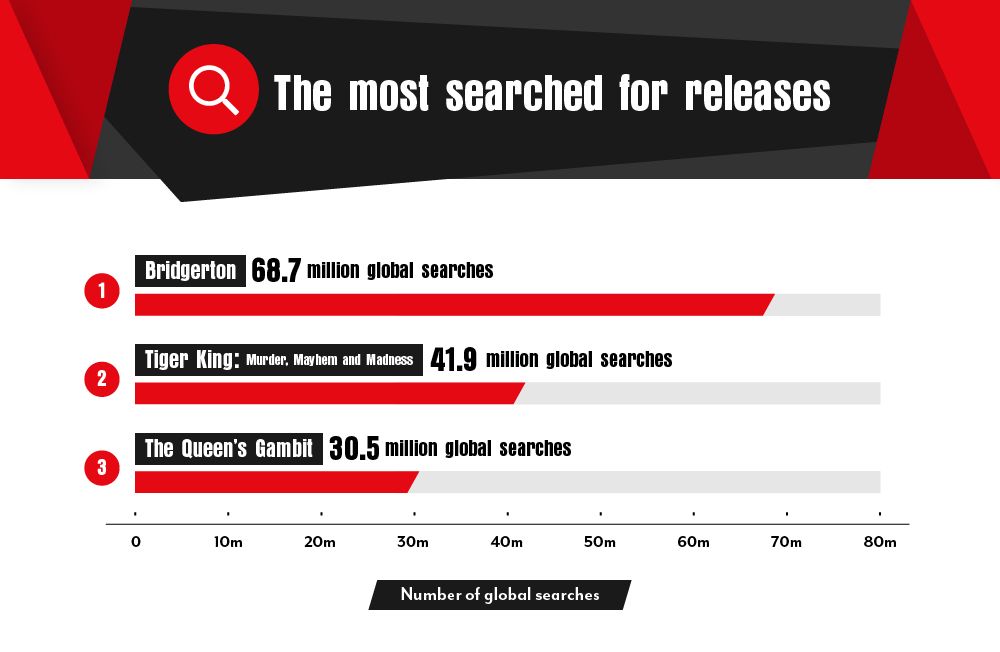 Breaking these stats down by each factor, we looked firstly at the releases that have been ‘Googled’ the most. Since January 2020, these are the shows that viewers all over the world have wanted to know more about.

The most Instagrammed releases 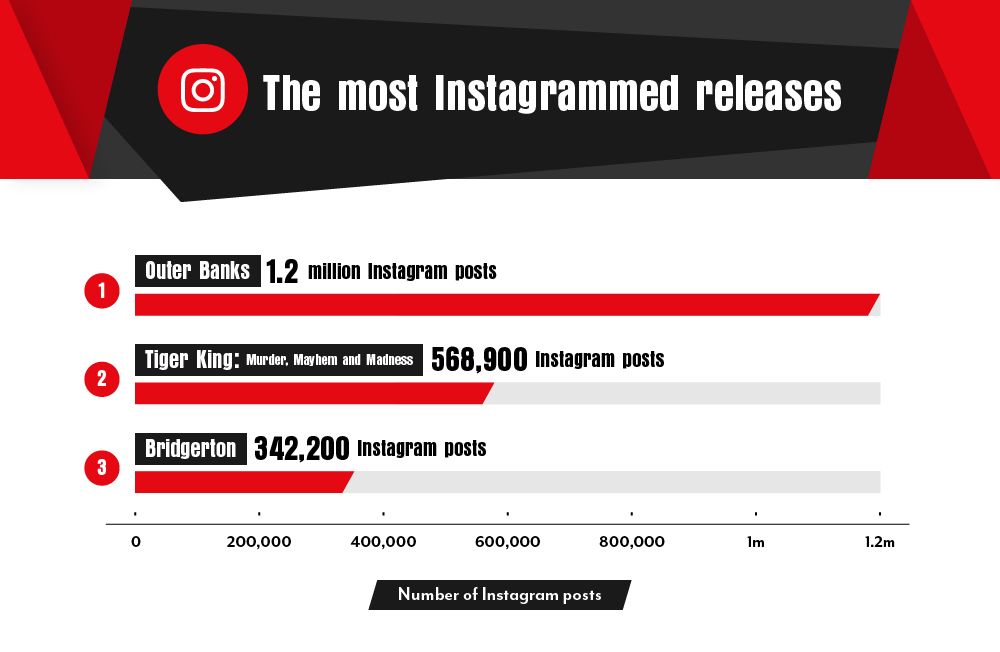 Secondly, we looked at the number of Instagram posts using the show and movie titles as hashtags. This is where the conversation continued, spilling out into social media and beyond.

The most written about releases 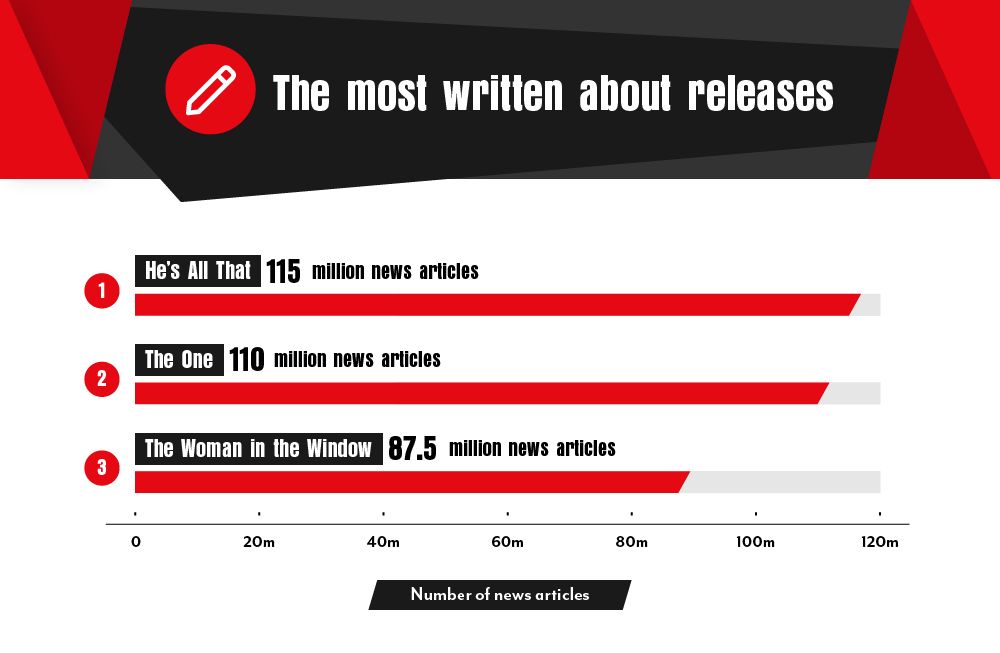 We also looked at the releases that got journalists and reviewers talking the most. Whether they were writing scathing reviews or thoughtful commentaries, these are the movies and shows that got the most media attention.

The most engaged with Netflix releases 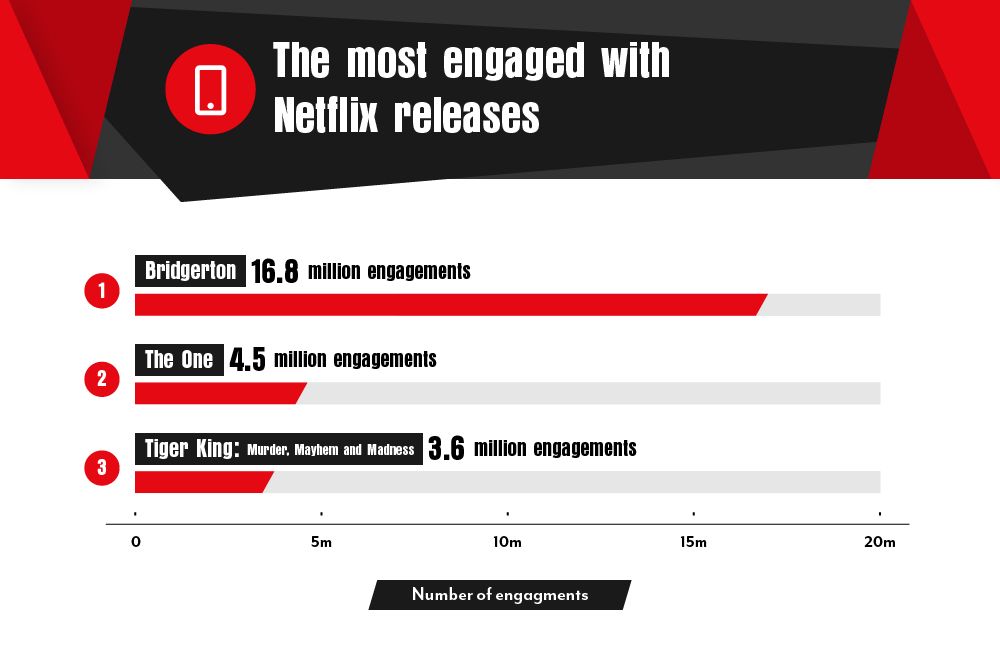 These were the show that people were talking about in the form of comments, likes, shares and other types of engagement on articles and media pieces. 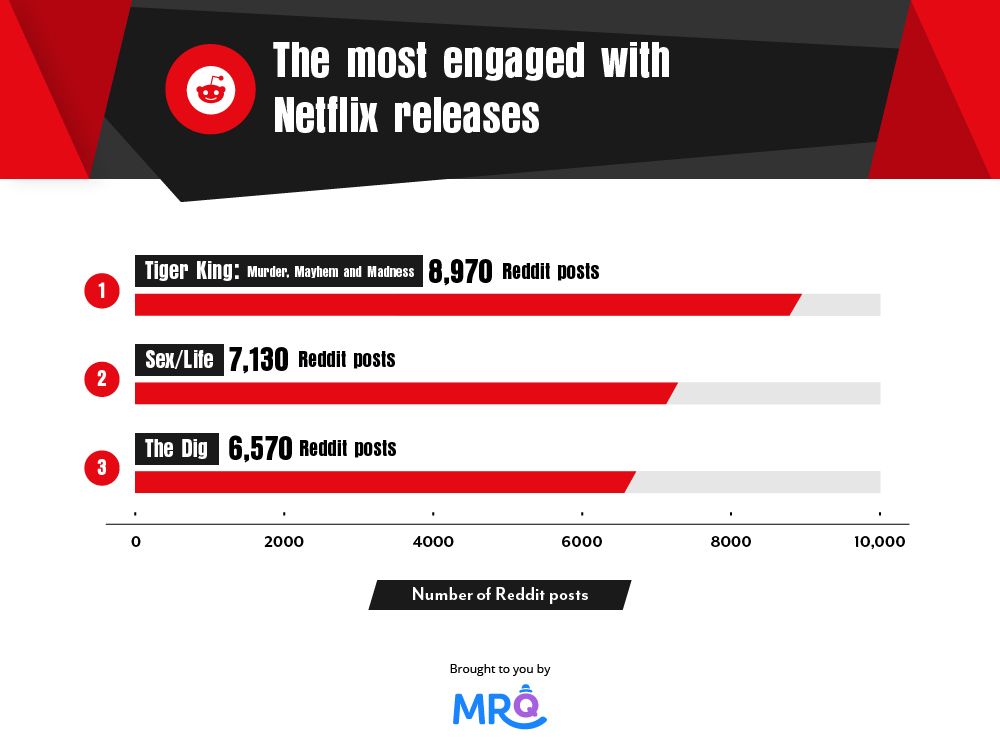 While Instagram was ablaze with talk about Outer Banks, Reddit had a few different priorities, with thousands of posts about these releases.

Taking a list of the Netflix original movies, documentaries and shows released since January 2020, we were able to compile the numbers for each factor:

Global search volume: using the time frame of January 2020-August 2021 and looking at searches worldwide from Google Keyword Planner, we took the total number of searches from this period for the name of the release. Where the name could have referred to something other than the release, such as ‘The One’, we included the word ‘Netflix’ as an identifier.

Instagram Posts: using the same search terms as those used for global search volume, we searched for Instagram hashtags to find the number of posts relating to each title, again using ‘Netflix’ or ‘movie’ to identify terms that could refer to something other than the release.

Number of News Articles: we searched Google news for each title, using the timeframe of January 2020-August 2021, taking the number of articles for each one.

Total Engagements: using Buzzsumo, we were able to find the number of engagements, such as comments, likes and shares attributed to articles about the releases, covering the past year.

Number of Reddit Posts: we searched using an advanced Google search operator, we were able to search for the number of Reddit posts featuring the title of each Netflix release.

Netflix Trending Score: finally, we ranked each release using a normalised score out of 10, which took a score for each factor, averaging out each one to give a final score out of 10. In this ranking, we gave a larger weighting to the global search volume as this indicated the shows and movies that were being searched for the most.

How to play Megaways Slots

Master Megaways in minutes!
We show you how to play Megaways slots, the best games to play and give you advanced tips and tricks. Read the definitive Megaways guide at MrQ.

The Kardashians vs The World's Wealth
How does their net worth compare with global economies and how long would the average person need to work to achieve their wealth?