In recent years, rooftop bars have become a summer hotspot for people to escape bustling city life and enjoy a drink with stunning views. But which European city is home to the best rooftop bars?

We’ve analysed 145 rooftop bars in 30 European cities based on five metrics that can make or break a great rooftop bar experience, including average review rating, number of reviews, the popularity of Instagram hashtags, and average temperatures in the summer.

In addition, we took a closer look at each city to determine what each city has to offer outside of the rooftop bars and if it would make a great location for a city break. We analysed the average cost of a pint of beer, the average price of a cocktail, one night in a hotel, and a meal out in each city. We also reveal the number of bars and clubs, and how many hours of sunshine each location gets in summer to find the ultimate location to escape to.

The top 10 rooftop bars in Europe 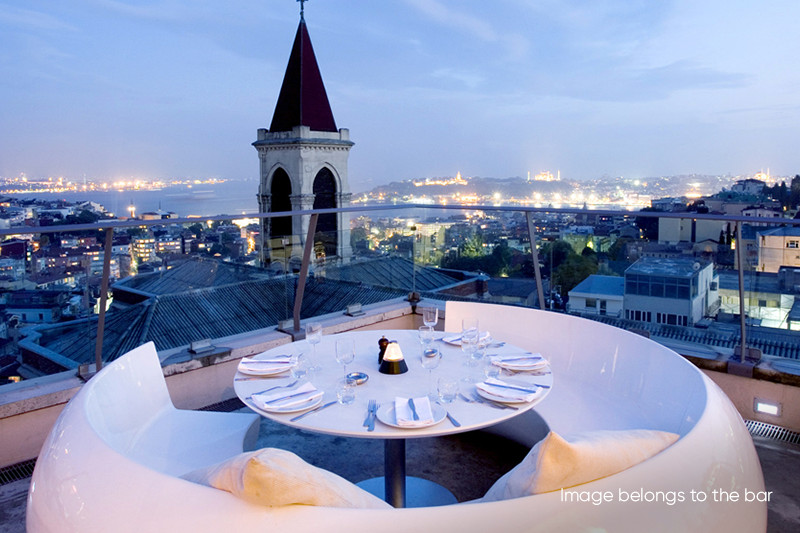 360 Istanbul takes the top spot, with 3,532 reviews, a four-star rating, and average temperatures of 24.5°C in summer, guests can sip their drinks while enjoying Istanbul’s beautiful views. The multi-award-winning modern penthouse restaurant, bar and club that hosts DJs, vocalists and dancers for performances each weekend, has also been tagged 12,102 times on Instagram. 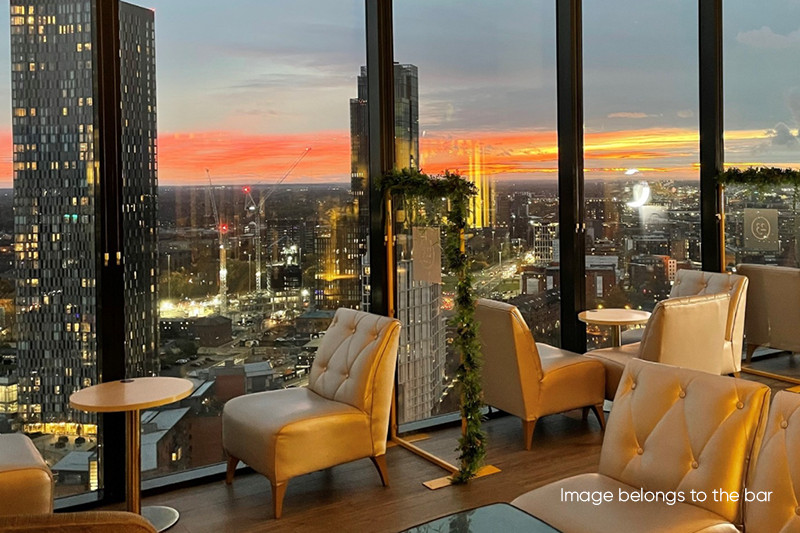 The Manchester-based bar, Cloud 23 takes second place, thanks to its impressive popularity on Instagram with over 40,000 hashtags. Despite scoring a rating of 3.5 across 2,105 reviews, the bar located in the Hilton hotel offers delicious cocktails with incredible views of Manchester’s skyline. However, the average price of a cocktail is £15.00 and if you’re looking for warm weather, Manchester’s average temperature of 17°C may not make it the best destination for you. 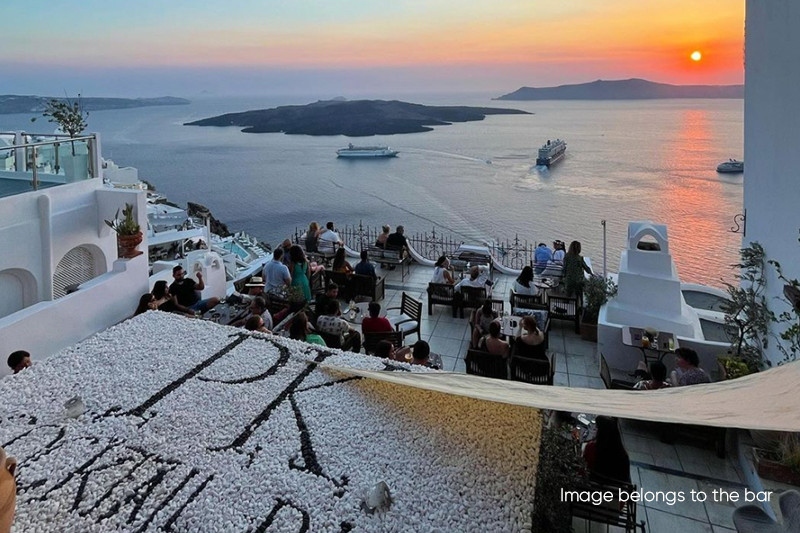 PK Cocktail Bar, Santorini’s longest-running cocktail bar ranks third. Clearly popular with its customers, PK Cocktail Bar has secured an impressive five-star rating and the hashtag #pkcocktailbar has been used 2,583 times. With an average temperature of 26°C in summer Santorini is the warmest location out of our top three cities. 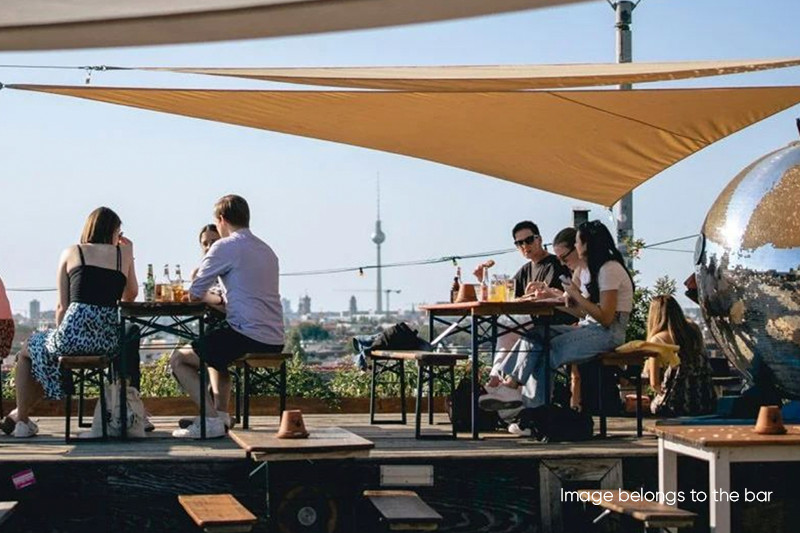 Located on the rooftop of a shopping centre, Klunkerkranich in Germany’s capital takes fourth place, with an average rating of four stars across 449 reviews. With over 34,000 Instagram hashtags it is clearly one of Berlin’s hottest spots and with the cheap price of just £6.09 on average for a cocktail, this is hardly surprising. 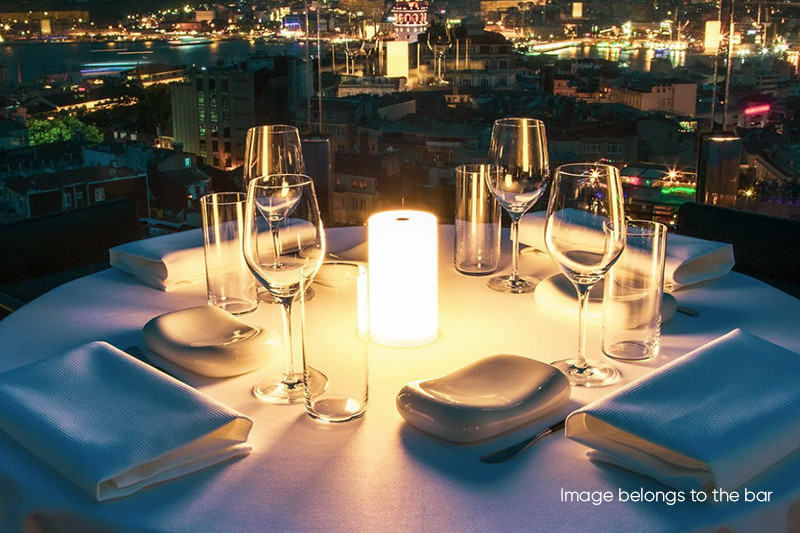 With over 2,000 reviews and a four-star rating, Mikla secures itself fifth place. Offering some of Istanbul’s best views, guests can also experience visionary interpretations of traditional Turkish dishes. The average price of a cocktail comes to £9, which can be enjoyed in 24.5°C weather in summer. 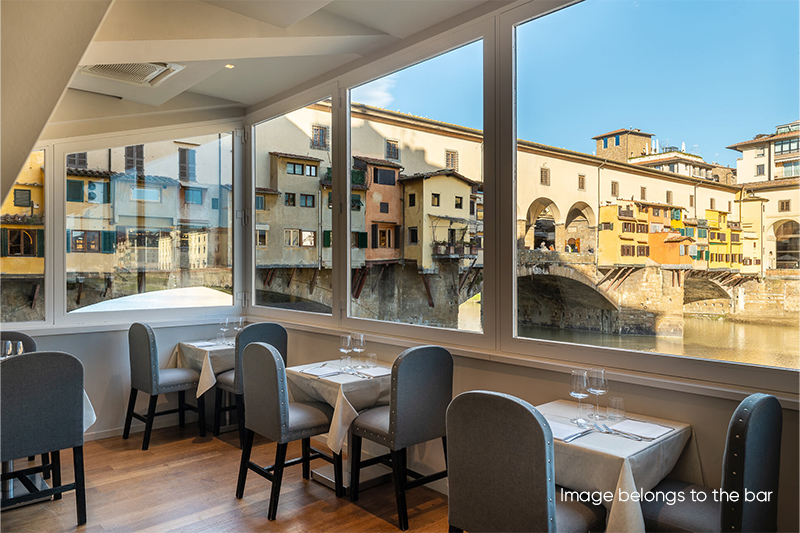 Located alongside the Arno river, Golden View Open Bar is Florence’s best rooftop bar and restaurant. As in Istanbul, the average temperature in summer is 24.5°C and visitors have tagged #goldenviewopenbar 943 times. If you’re looking to enjoy a bottle of wine, with or without food, you can expect to pay £20.16 for the cheapest bottle of white or red wine. 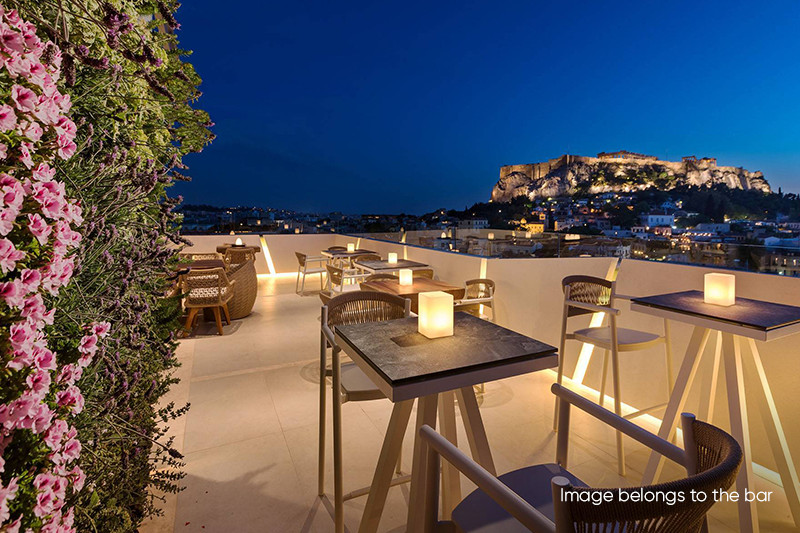 Thea Terrace Bar may be one of Athen’s hidden gems, with just 134 Instagram hashtags, however, reviewers rate it 4.5 stars. With sizzling temperatures of 27.5°C, Athens is undoubtedly the perfect place to go if you want to enjoy cocktails in hot weather. 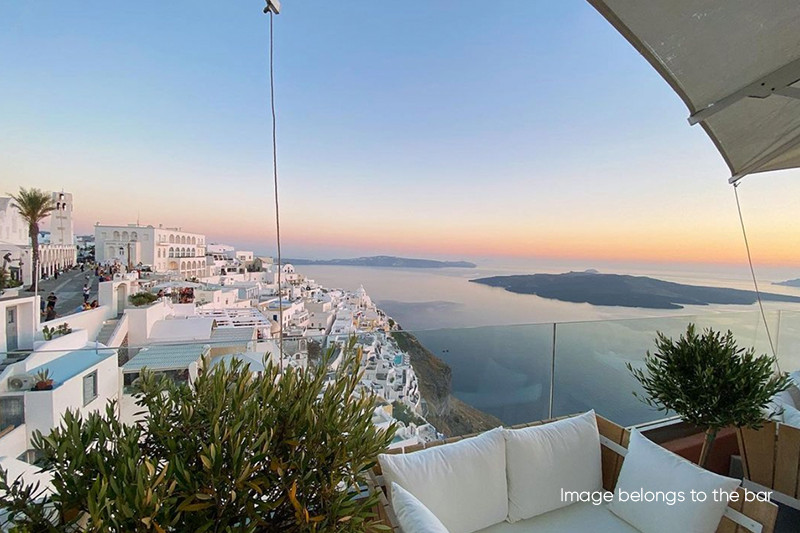 On the top floor of the Panorama Boutique Hotel, V Lounge Cafe & Cocktail Bar ranks in eighth place. While you may get stunning views, this also comes with a price tag, as the average price of a cocktail comes to almost £37. Despite this, it gets reviewed well, scoring 4.5 stars with 1,092 reviews. 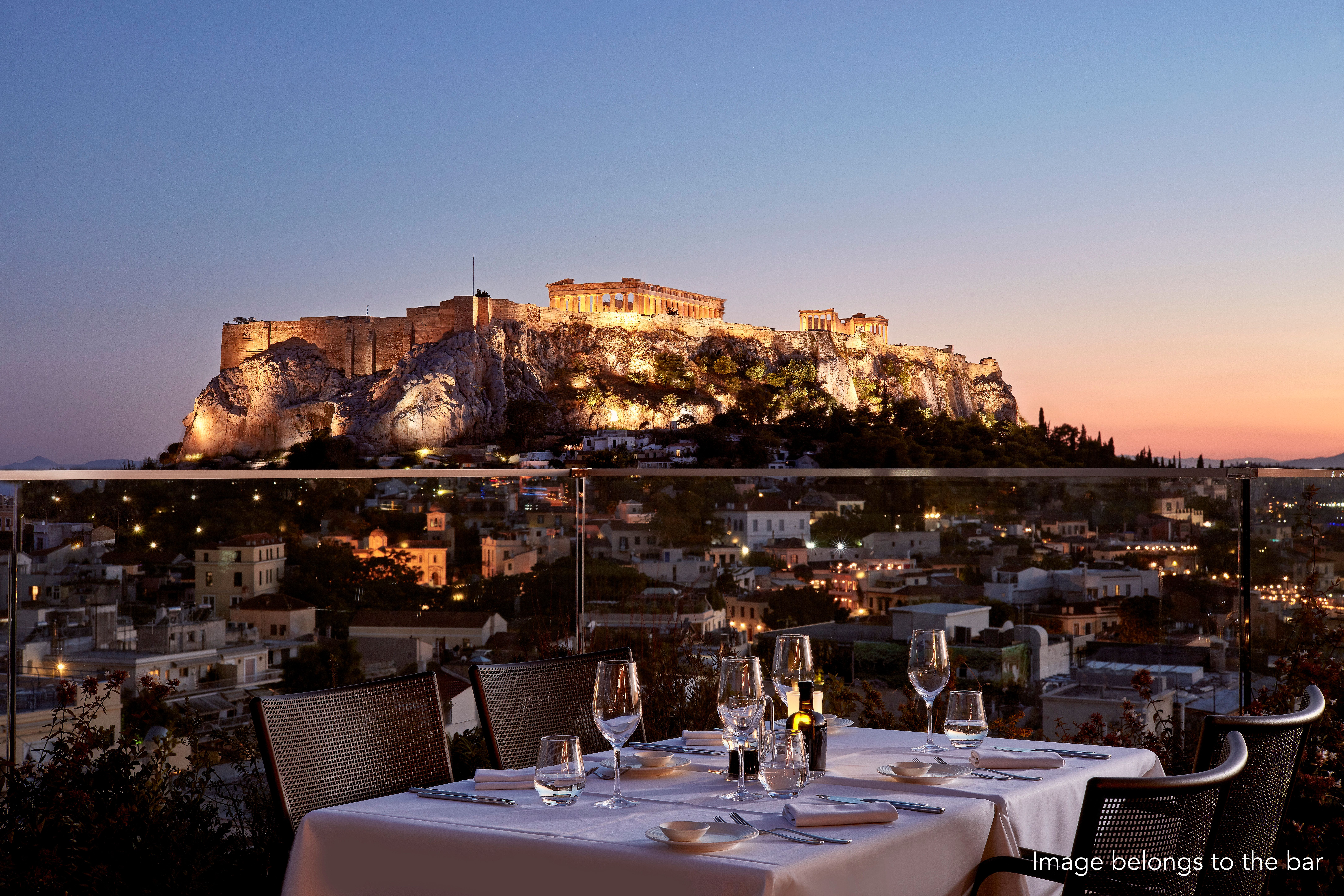 Greece is clearly the top destination if you’re looking for a great rooftop bar experience, with Metropolis Roof Garden in Athens placing ninth. Relatively new, this restaurant and bar is another hidden gem that must be on your bucket list if you’re a rooftop lover. With just 138 reviews so far and 187 hashtags on Instagram, it has secured a near-perfect 4.5-star rating. 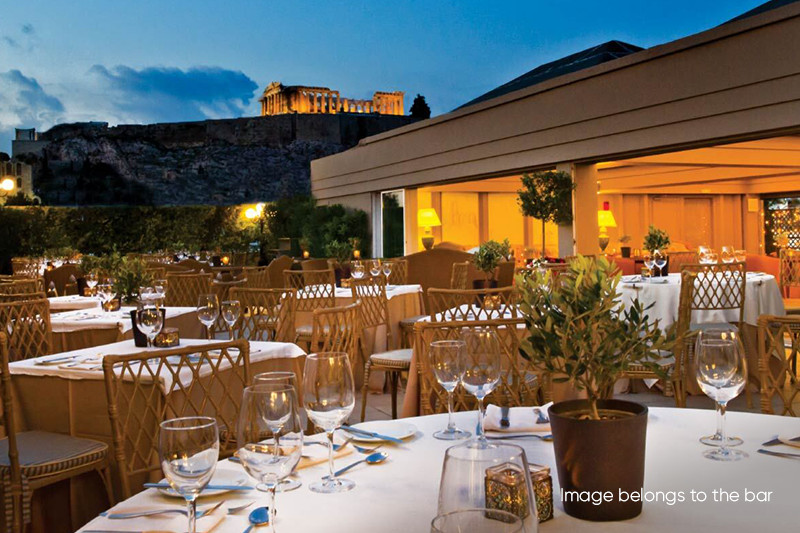 Rounding off the top 10 is another location in Athens, with breathtaking views of the museum of Acropolis. Another one of Greece’s best-kept secrets, this seasonal rooftop restaurant located on top of the five star Divani Palace Acropolis has a fantastic rating (4.5 stars).

Which of the 30 cities also makes a great destination for city breaks?

Now that we’ve discovered the best rooftop bars to explore this summer, we wanted to find out what each of the cities analysed has to offer and where you should go for a last-minute city break.

We compared all 30 cities against six metrics, including food and drink prices, the number of bars and clubs, the average cost of one night in a hotel and the total sunshine hours in June, July and August.

Once again, Istanbul comes out on top as the best destination for a city break in Europe. Home to a varied melting pot of cultures and cuisines, you’ll find Europe’s cheapest meals in Turkey’s largest city with the average cost of a meal being just £4.27 per person. This city also ranks number one for affordable accommodation with a night at a hotel priced at £34.88 per night on average.

Prague comes in second place, with half a litre of draught beer costing just £1.53 in the Czech Republic’s capital. Cocktails in this city have an average price of £6 and you can dine out for around £8.66 per person. The city also has the second-highest number of pubs and bars of all locations (631).

In third place is the Spanish city of Seville, where the sun shines for a total of 1,043 hours each summer. Domestic beer costs around £1.68 per half a litre, and a night’s stay in a hotel here has an average price of £4.16. Cocktails are also cheap, costing an average of £7, however, in terms of number of bars and pubs, with 182 Seville ranks fairly average.

London ranks further down in 22nd place, with the average cost for beer and a cocktail substantially higher at £5.50 and £11 respectively. What London lacks in sunshine (just 583 hours in summer), it makes up for in bars and clubs, as it has the highest number of all 30 cities - an impressive 1067.

At just £1.47 per half a litre, Budapest offers the cheapest draught beer. A popular choice for many stag and hen do’s, it is hardly surprising that the cheap cost for alcohol attracts lots of people. While the number of venues to enjoy the low prices is slightly low (251), our number one rooftop bar, The Duchess, is one of them.

Take a look at the other top cities for cheap beer:

With its instantly recognisable blue and white architecture, golden orange sunsets and steep cliffs that lead into the sea, Santorini is a location that is complemented perfectly by the sun.

Other cities with the most sun in summer include:

Perhaps unsurprisingly, Manchester comes in last place when it comes to the number of sunshine hours during the summer months. Known for it’s rainy and unpredictable weather, across June, July, and August Mancunions get just 460 hours of sunshine. Brussels and Reykjavik follow in second and third place with 491 and 521 hours respectively.

With summer around the corner, has this spiked your interest in a summer getaway to discover some of Europe’s best rooftop bars?

Please find the full ranking below:

The Best Cities for Sociable Students
A look at which university destinations are the best from a social perspective, looking at value for money, nightlife and fast food!

How to play Poker

Everything you need to master one of the most popular casino card games!