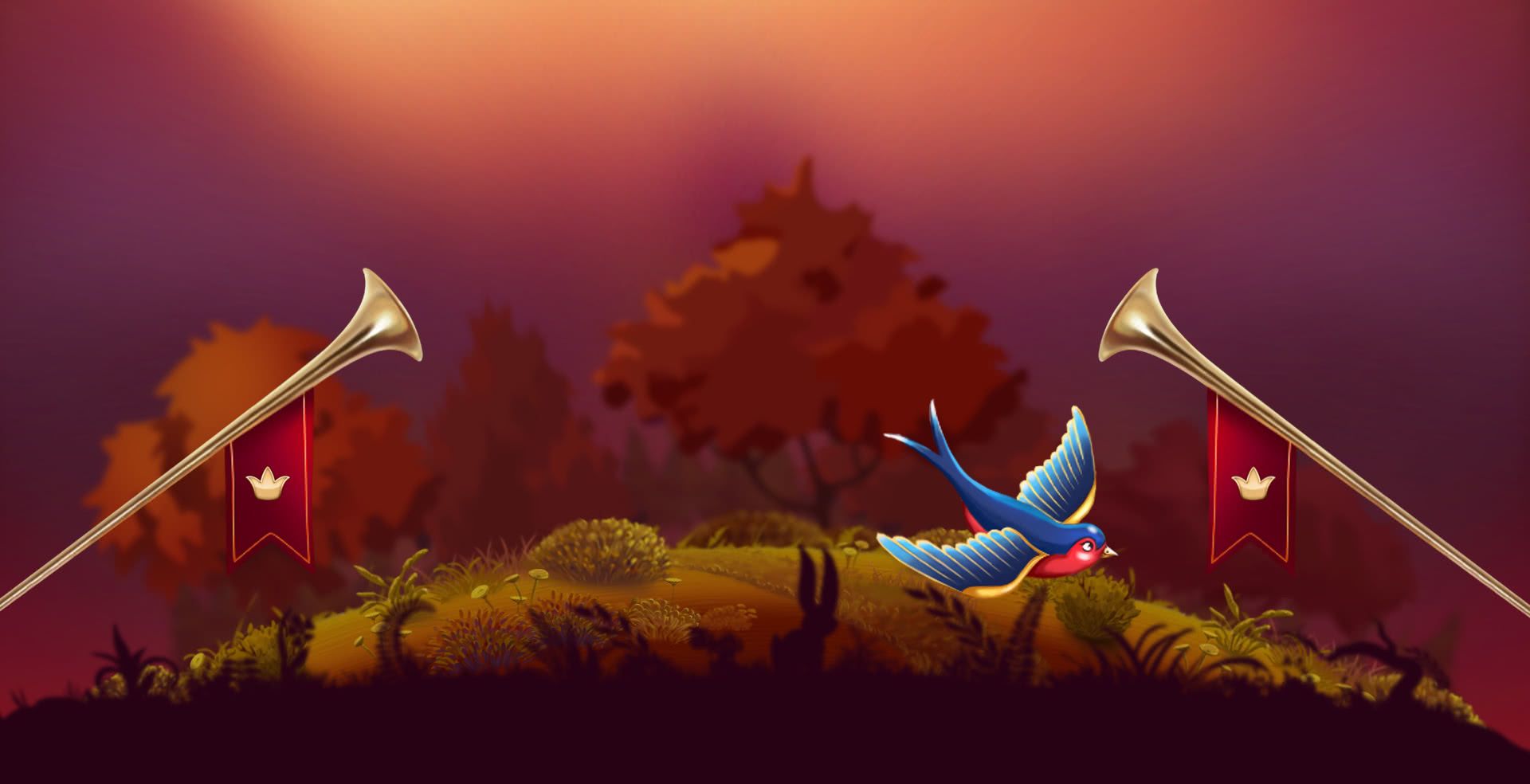 Video slots are by far the most exciting way to play online, and Fairytale Legends - Red Riding Hood, from NetEnt has it all. And then some more. As Little Red makes her way through the woods to visit her grandma, she is treated to lots of little surprises of her own. This game is not, as you might imagine, all about being tricked by the greedy Woolf. No, if anything he looks a little scared of our Red. That is until she is lured into the Beware the Wolf Feature.

The transparent reels showcase the moving background as little Red trots happily off to see her grandma. Throughout her journey, she is visited at random points by a fabulous Fairy who is there to increase your chances of taking home some big prizes. And Little Red, couldn’t be more thrilled for you as she celebrates line wins with her happy dance. Big wins are even accompanied by a fanfare of trumpets, while metallic confetti showers you with praise. With as many as 7 Bonus Features, the atmosphere has a movie-like quality to it, you won’t ever want to reach destination grandma. 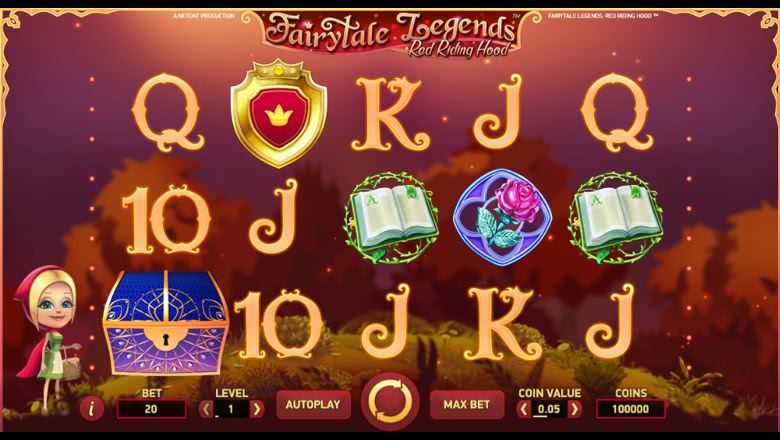 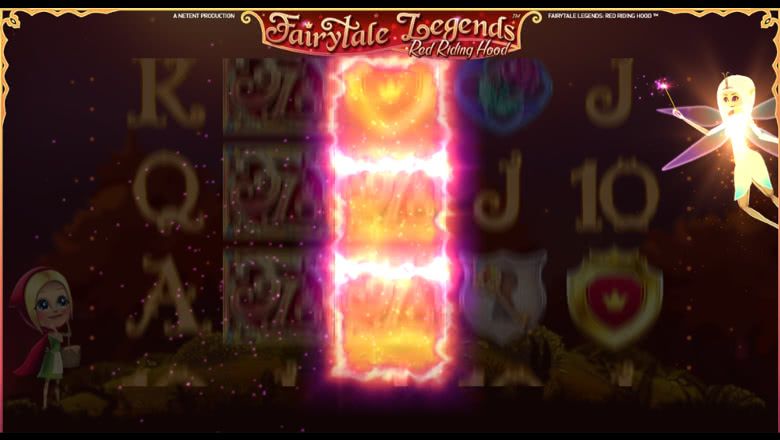 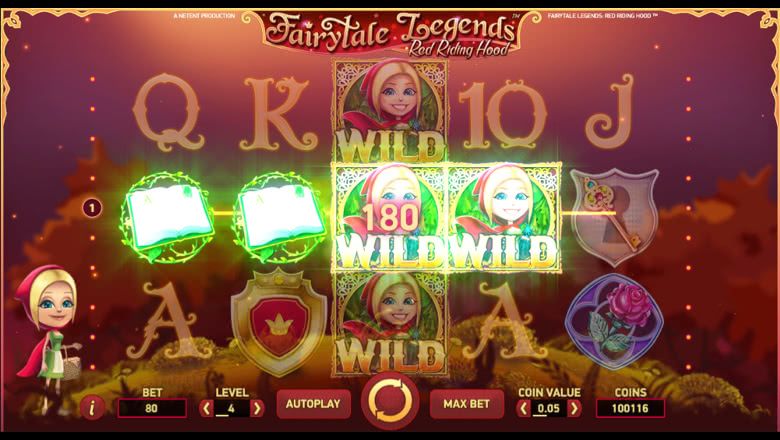 That Fairy is a busy little thing, popping up when you least expect it. She is capable of triggering 3 Random Features, activated randomly in the main game. It isn’t just the Fairy who can make magic in this game, Little Red is a pretty useful symbol as well. It looks like the Wolf has driven her Wild, but that’s okay, as we know Wilds are our friends when playing slots.

There is an eclectic mix of picture symbols that don’t tie into the traditional tale of Little Red Riding Hood, but then this is no ordinary adventure. The Chest Symbols are the Scatter Feature, picking 1 of the 3 will award you either the Beware the Wolf Bonus Feature, Free Spins, or the Coin Win feature.

The Beware the Wolf Bonus Feature takes you to an aerial view of the woods, the Wolf is lurking in there somewhere, but you won’t see him until the last minute. This board game style feature gives you plenty of chances to pick up some nice multipliers, but as it says ‘Beware’ the Wolf. The feature will end if he jumps out at Little Red and gobbles her up. It’s not game over though, she’s soon rescued by the woodcutter and back in the main game. Phew, she had us worried there. So, if you go down to the woods today be prepared for a big surprise, and no, it isn’t a Teddy Bears Picnic!

The Chest is the Scatter and can appear on reels 1, 3, and 5. 3 Chest Scatter Symbols appearing on the reels at the same time will trigger the Bonus Feature. Pick 1 of the 3 Chests to trigger Beware the Wolf, Free Spins, or the Coin Win feature.

During the Beware the Wolf Bonus Feature players move around a board and collect prizes, these include multipliers, coin wins, and the jackpot coin win. The multiplier goes up to 20x. The Wolf appearing and gobbling up Little Red ends the Bonus Feature. During the Coin Win Feature, players get a multiplier of 15x.

The Fairy triggers 3 Random Features in the game, Fairy Magic Spin, Fairy Surprise, and Fairy Wild Spin. Each feature can be triggered randomly in the main game.

The Fairy Magic Spin has a random cluster of 5 to 9 matching symbols that land on the reels, in a single spin.

During the Fairy Surprise feature, one picture symbol is selected randomly on the reels. Other symbols then turn into the selected symbol. The game continues as winning combinations are formed.

In the Fairy Wild Spin feature, up to 4 sticky Wilds can land on the reels 2, 3, and 4. The feature is activated when players land at least 2 Wilds in any position on those reels. 10 Free Spins will be awarded.