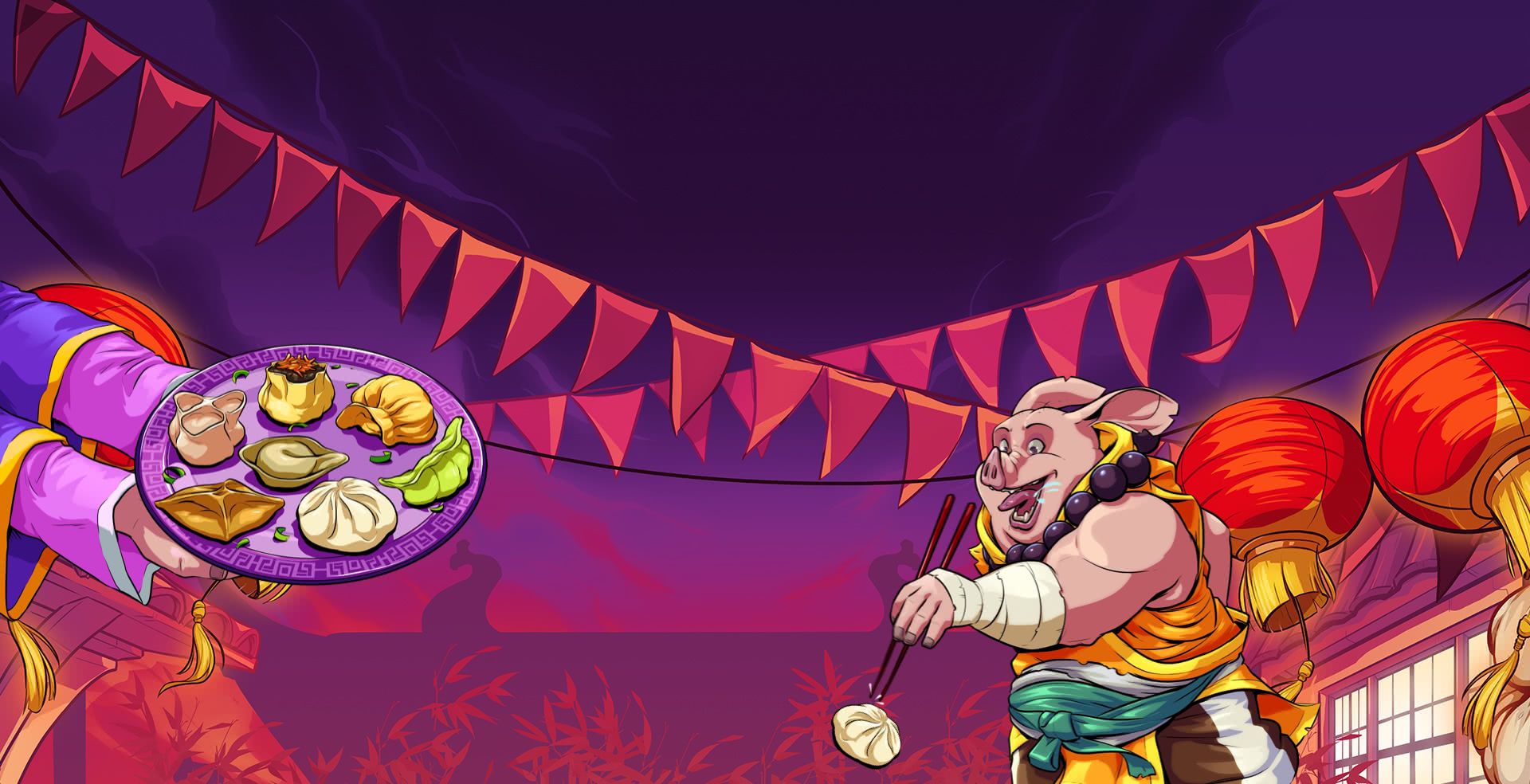 Everyone enjoys the chance to pig out once in a while, and this Eyecon slot gives you the chance to do exactly that! Pig’s Feast is themed around Chinese cuisine, as the reels are full of delicious-looking food that despite being cartoonish, are definitely good enough to eat! There are various plates in the background with steam rising, and some exquisite building features around them, in front of a picturesque purple sky. A typical Oriental-sounding melody plays as you spin the reels, and you might hear some grunting from the pigs too. Watch out for the pigs, as they can trigger some pretty exciting bonus features. Will you be bringing home the bacon today?

How to play Pig's Feast

Pig’s Feast has 25 paylines, and they’re all played from left to right across the 5 reels here as normal. There are 10 different regular symbols which you might come across while you play, and they range in value from the Rice Bowl and the Teapot, which give you a maximum of £4 from a £1 spin, to the Firework symbol. This is by some distance the most valuable symbol of the lot, and you can win a huge £200 from just that £1 bet! In between are plenty of tasty dishes certain to whet your appetite, while we can’t forget about the pigs themselves either. Though both the Male and Female Pig symbols are Scatters, the Male Pig symbol doubles up as a Wild symbol, and substitutes for all symbols apart from his female counterpart.

If the Female Pig symbol enters the fray, you’re in with a chance of getting the Dumpling Pick. 3, 4, or 5 Female Pig symbols will award you 2, 3 or 5 Picks respectively, and each Pick can award you up to 100x the total wager. The prizes are all added together, and you can even trigger this feature during Free Games too! Speaking of Free Games, you’ll win 15, 20, or 25 by getting 3, 4, or 5 Male Pig symbols respectively on the board at once - you can retrigger them a maximum of 15 times too!

If you’ve noticed a stack of bowls to the right of the play board, you might be wondering what they’re all about. When the stack contains 17 bowls, you’ll trigger the Firework Bonus! Here, crates of fireworks will appear, and they’ll either ignite and explode or simply misfire. Each crate can award a prize of up to 100x your total wager, but the crates can contain different prize values. During the whole bonus, you can win up to 500x your total wager, but remember that you can’t trigger it during Free Games, or on the same spin as a Prize Pick. If you trigger the Firework Bonus on the same spin as Free Games, you’ll complete the former first before giving the latter a go!