Whether you’re a Marvel superfan or a sucker for a rom-com, Hollywood’s biggest movie stars play a huge part in the world’s most iconic films. But have you ever wondered which actors have the best track record when it comes to movie success, and whose performance is on the decline?

Experts at MrQ have analysed 30 iconic actors to find out how good they really are, revealing their average IMDb scores across all of their films and IMDb votes. In addition, the data tracks historic performance since 1980, to determine which stars are getting better and better with each film, and which might be on their way out.

So, how do your favourite actors compare?

The top 10 best performing actors based on the average IMDb score include:

Whoopi Goldberg is crowned as the top-performing film star, with her average IMDb score sitting at an impressive 7.39. At 66 years old, this American actor has featured in iconic films, including Sister Act, released in 1992 with an IMDb score of 6.5 and the 1985 classic, The Color Purple, which had an impressive score of 7.8 on the review site. 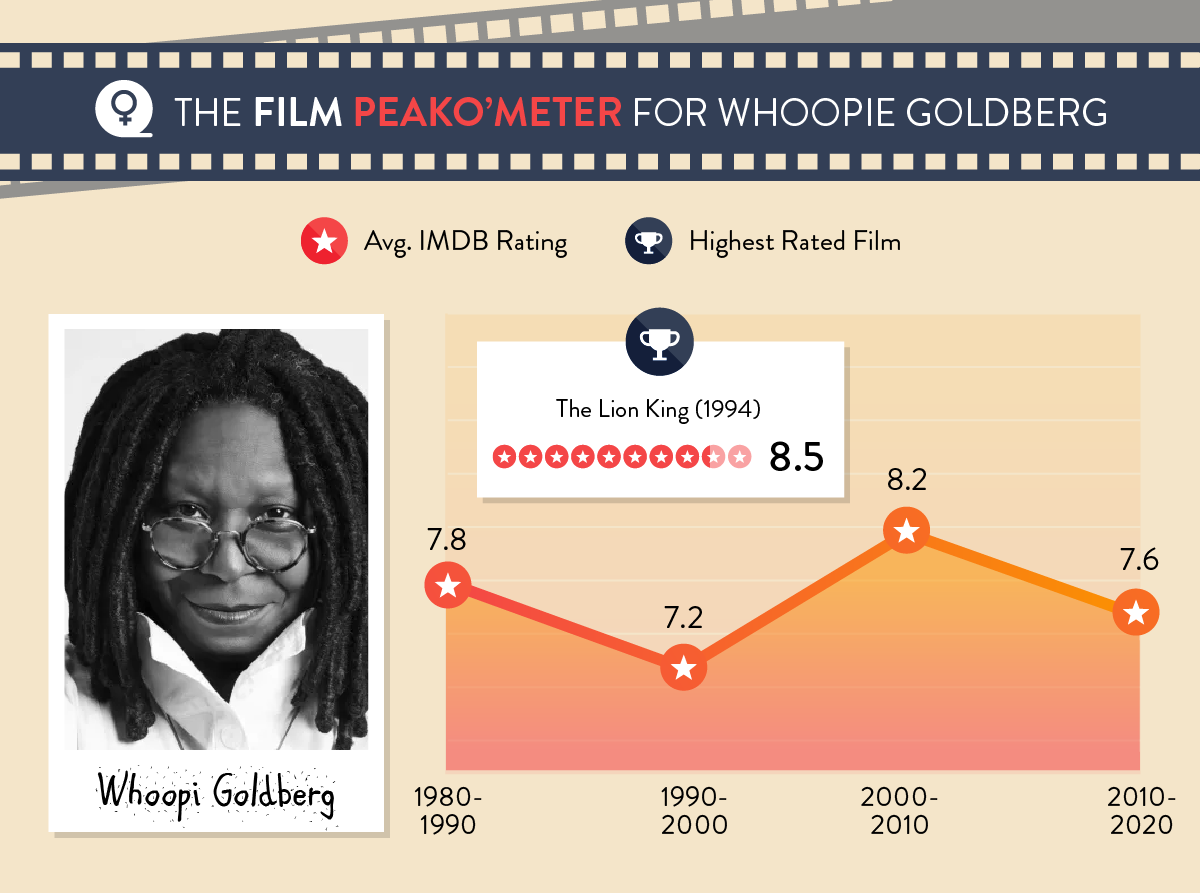 Leonardo DiCaprio ranks second with an average IMDb score of 7. Known for his impressive collection of films he’s been in (a staggering total of 57) including Titanic (1997), The Wolf of Wall Street (2013), The Revenant (2015) and Inception (2010), DiCaprio has proved himself to be one of Hollywood’s most versatile actors, starring in some of the world’s greatest films. 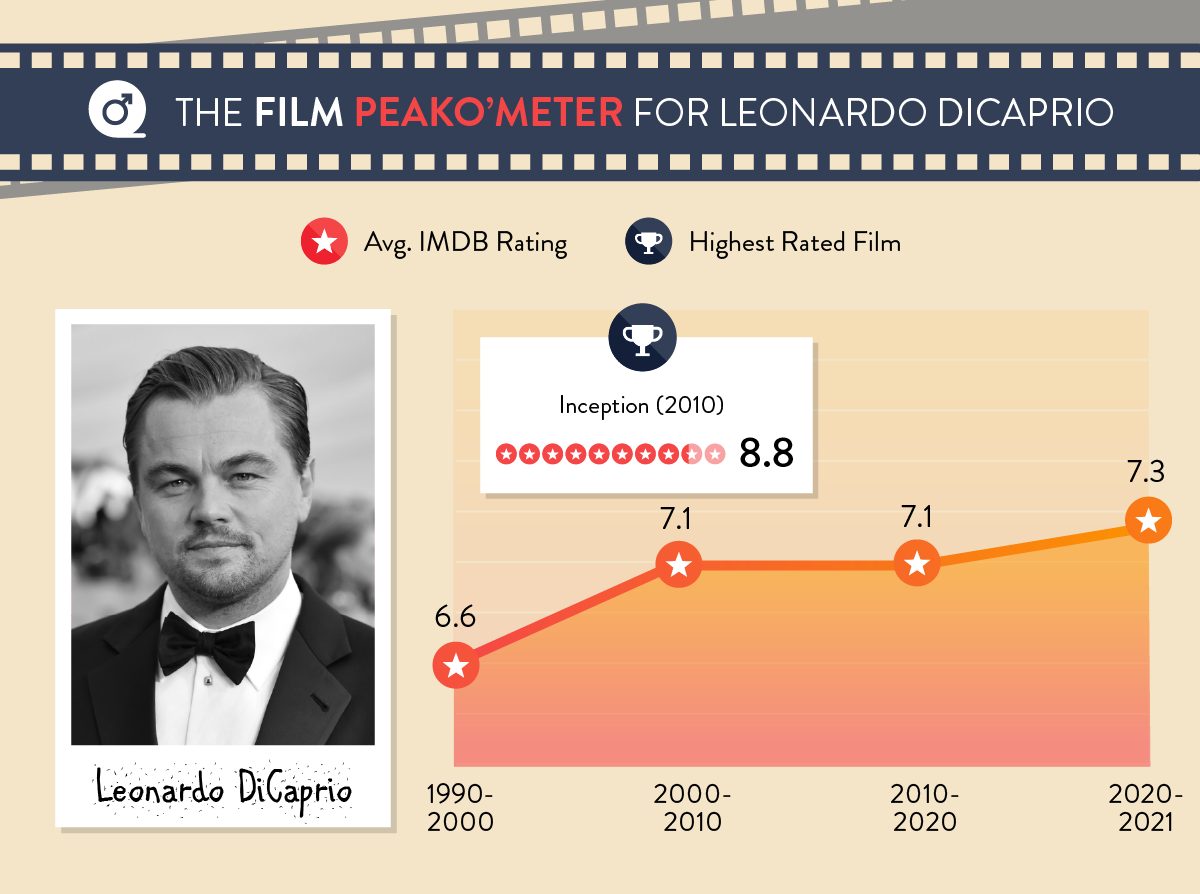 The relatively new Hollywood star Zendaya takes third place, with an average IMDB score of 6.99. Famous for her role in The Greatest Showman (2017) and the latest Spider-Man movies alongside Tom Holland, Zendaya originally rose to fame on the Disney Channel series Shake It Up. Due to her shorter career compared to some of the other Hollywood legends, we decided to visualise the average rating of her films for each year that they were released. While a couple of the films released in 2021 were Zendaya’s most successful to date, the poor performance on Space Jam: A New Legacy (4.4) dragged her overall rating down to just 7. 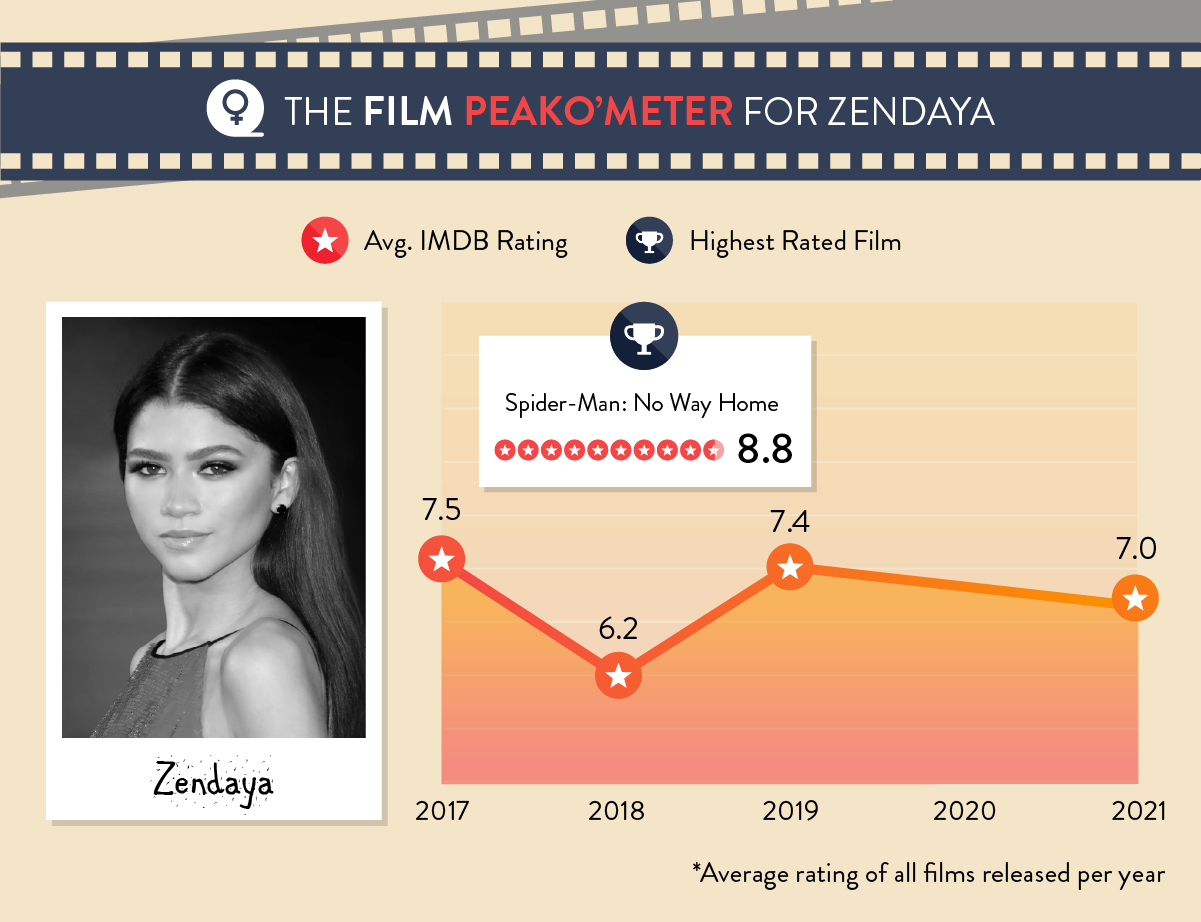 English actor Helena Bonham Carter takes fourth with her films scoring an average IMDb score of 6.86, which comes as no surprise with her featuring in Fight Club (1999), Alice in Wonderland (2010), Sweeney Todd (2007), and unforgettably, playing Bellatrix Lestrange in the Harry Potter films, with every Potter film she features in having a score of no less than 7.5. 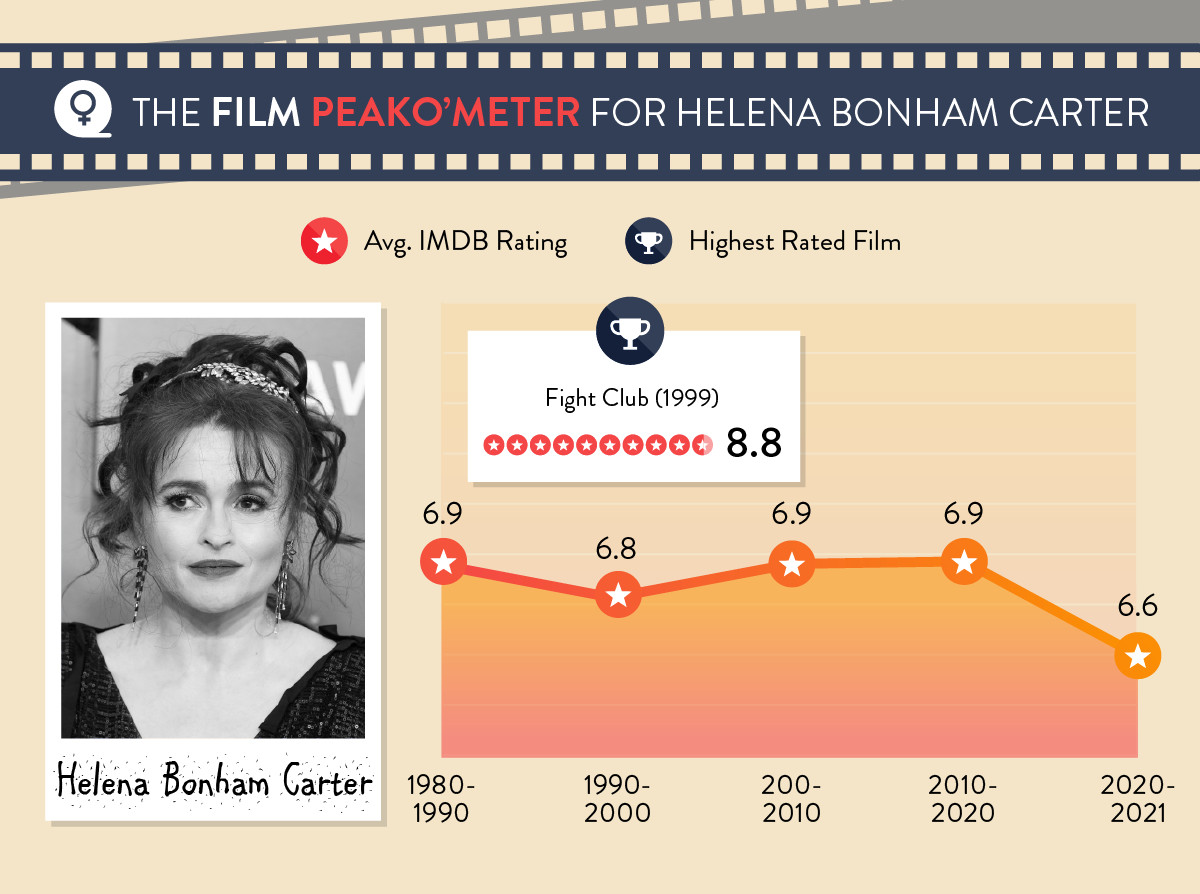 Scarlett Johansson takes sixth place after Brad Pitt, with an average IMDB score of 6.82 across 60 films. Johansson has established herself as one of the most successful Hollywood stars, earning the title of highest-paid actor in 2018 and 2019. The two-time Oscar nominee has starred in a breadth of roles, including the Marvel Avengers series where she played the character Black Widow - whose standalone film was also released earlier in 2021. 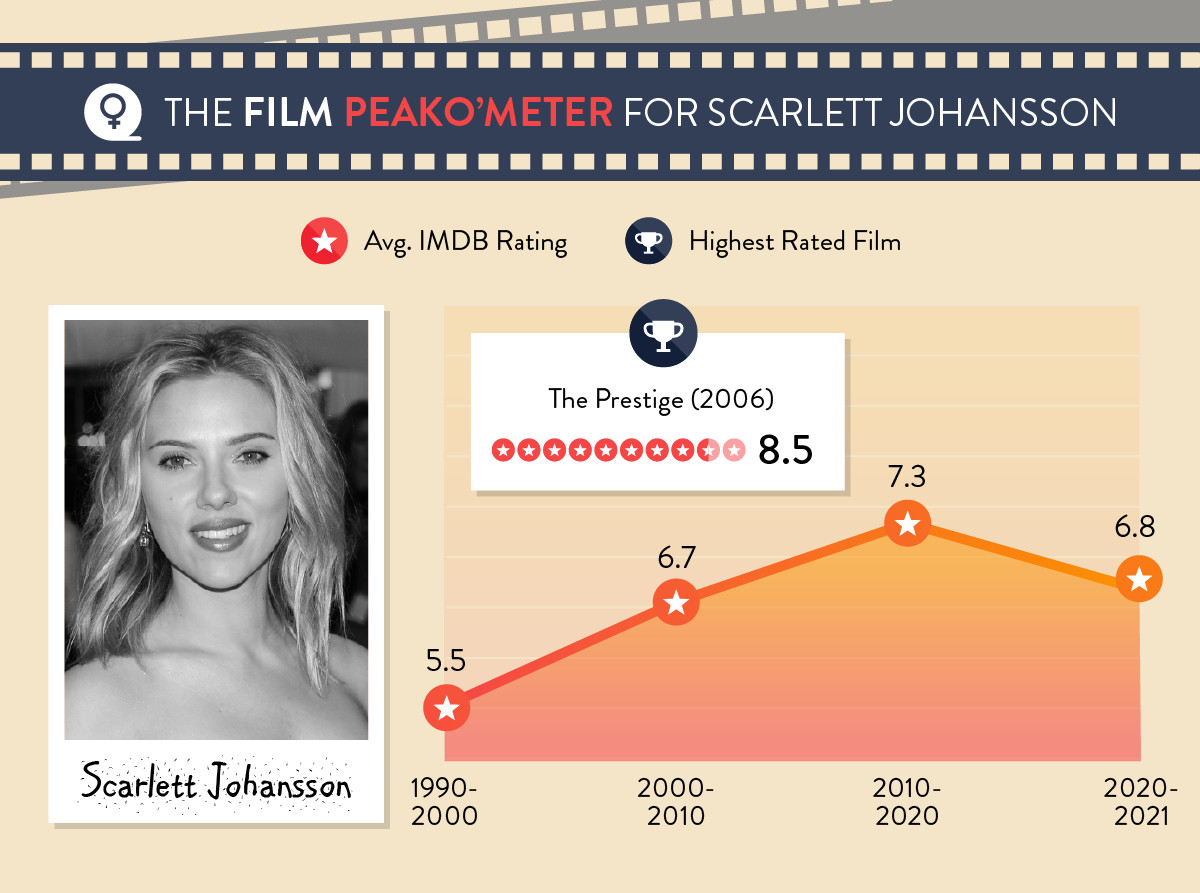 Other actors in the top 10 include movie-screen legend Johnny Depp, Saoirse Ronan, as well as Jennifer Lawrence.

Out of the 30 actors analysed, these are the top 10 worst performing ones, based on their average IMDb score:

Despite featuring in some huge Hollywood films such as Inception alongside DiCaprio, Tenet (2020) and The Dark Knight (2008), Michael Caine, comes in as the actor with the lowest performance on average with an IMDb score of 5.32, more than 2.7 below Whoopi Goldberg.

Next is Dwayne Johnson, also known as ‘The Rock’, with an average IMDb score of 6.06. Often featuring in comedies such as Baywatch (2017) and Jumanji (2017, 2021), Johnson’s performance comes in at the second-lowest of all actors analysed.

In third is one of Hollywood’s most iconic stars, Angelina Jolie, known most famously for starring as Lara Croft: Tomb Raider in 2001. Jolie has an average score of 6.28, followed by Margot Robbie at 6.39 and Robert Downey Jr. with 6.41. Also featured in the bottom 10 list is comedian star Ryan Reynolds, as well as Anne Hathaway and Reese Witherspoon.

Margot Robbie ranked as the most improved actor in the analysis, increasing her IMDb score across the decades by nearly 70%

Not every film can be a hit, with some being slightly more disappointing than others. But which star has shown that practice makes perfect, and has seen an improvement in their films across the years?

Looking at films dating back to the 1980s, the study shows how average IMDb scores have improved or worsened for each actor. 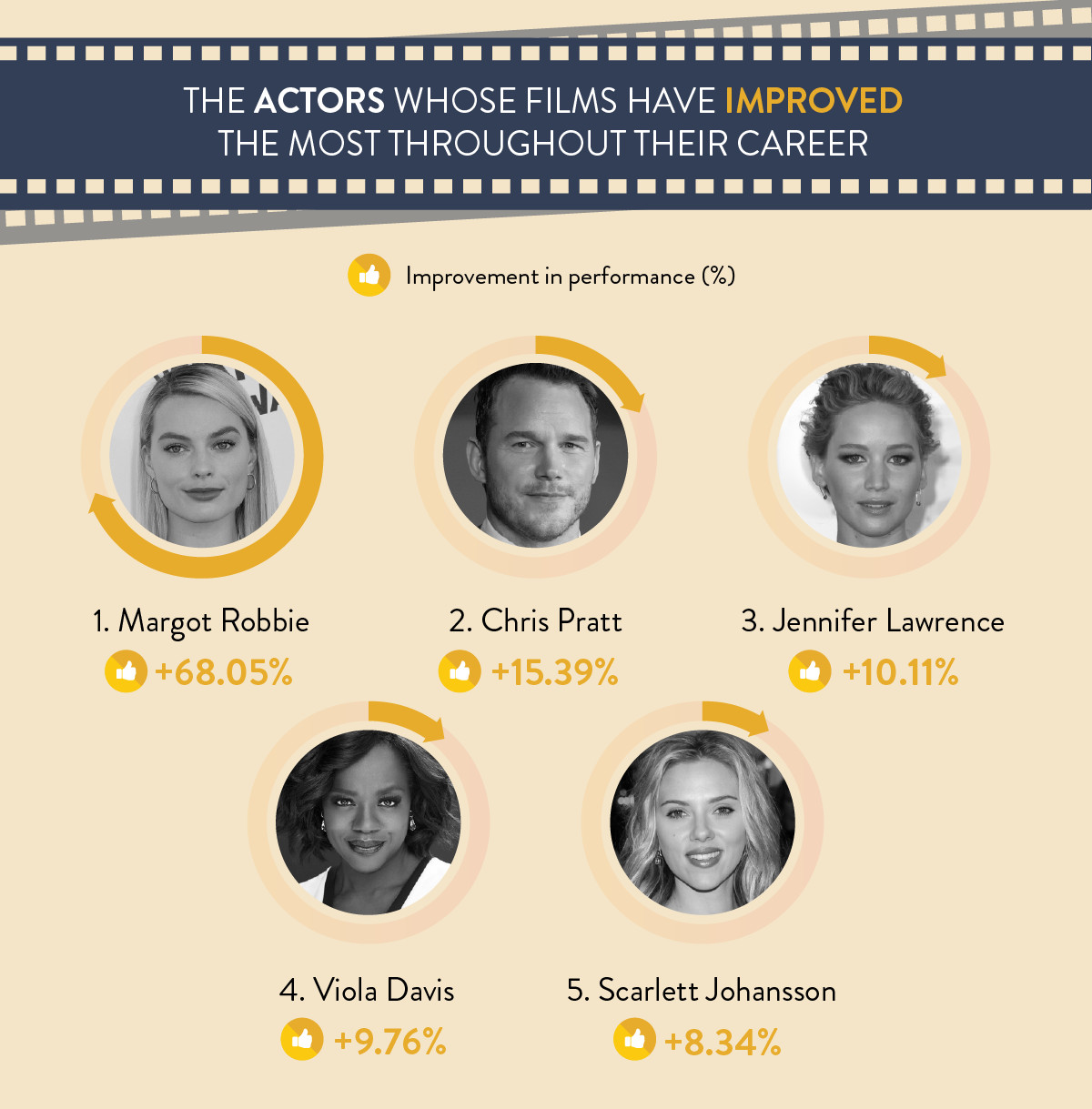 Despite still having one of the lowest average IMDb scores, Margot Robbie is crowned as the most improved of all actors analysed. Dating back to the 2000 decade with her first films averaging a score of just 2.85, Robbie has seen a huge improvement, jumping up to a score of 6.69 in the 2010s and now 6.78 for the 2020s so far. This comes as no surprise as she stars in some of the 21st century’s most memorable films, including her iconic role as Harley Quinn in DC’s Suicide Squad.

Chris Pratt is the next actor to watch out for, with his average IMDb score increasing by over 15% since his first average taken in the 1990s at 4.6. Jennifer Lawrence comes in third with a 10.11% increase in her performance.

The actors whose films have deteriorated the most throughout their career 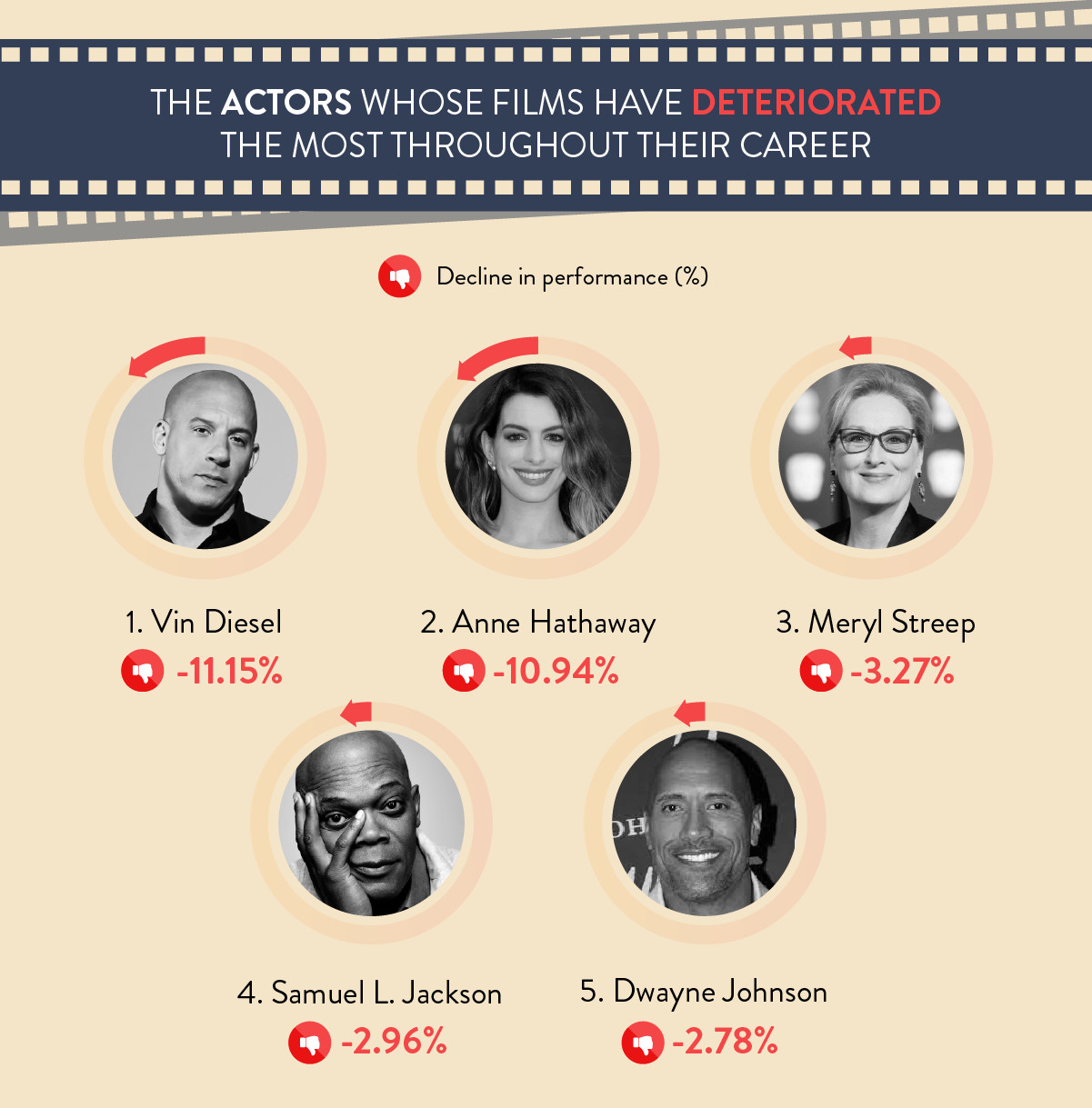 American actor and filmmaker Vin Diesel is the actor whose performance has declined the most, decreasing by 11.15% since the 1990s where his average IMDb score was an impressive 8.13, compared to a disappointing average in the 2020s so far at 5.45.

Meryl Streep and Samuel L. Jackson, and Dwayne Johnson have also seen a decline in their work.

Despite a decline in her performance and low overall IMDb score, Anne Hathaway takes the crown as the actor with the best award-winning rate, winning 68% of all awards she has been nominated for.

From the Golden Globes to the Oscars, winning an award is an indicator and celebration of great performances in Film and Television. But how do they compare to each actor's IMDb performance scores?

Analysing award nominations versus wins, our study shows which actors have had the best success rate:

Despite having the ninth-lowest IMDb score for her films, Anne Hathaway has proved extremely successful in the awards realm, winning nearly 70% (68.33%) of all awards she has been nominated for. Jennifer Lawrence comes in second winning just over 66%, followed by Olivia Colman at 64.71%.

When it comes to the actor who has been nominated the most, Meryl Streep takes the lead with over 130 nominations more than anyone else at a total of 390. She has also won the highest number of awards in total at 177.

With still eight years left of the 2020s, which actors will we see shine through this decade, and which will see a performance decline?